Metal Made Flesh – Vengeance on Kickstarter

Back Metal Made Flesh – Vengeance on Kickstarter

Indie comics all have their own charm and signature that makes them original, it’s what makes indie comics so great. They don’t follow the rules mainstream comics follow and that’s where we get evolution in the art.

Metal Made Flesh is an indie comic which has it’s own unique style and really has pushed the boundaries of modern comics, the dark gritty cyber punk world they have created has captured the imaginations of thousands of readers already and they are about to launch their third and biggest book yet with Vengeance.

To deliver the comic in good time they have started to use Kickstarter much like a lot of indie comic publishers, in the first three days of their thirty day campaign they have managed to raise £8,399 of their £9000 goal from 159 backers.

It’s been an amazing project to follow over the years, having spoken to the creators several times at conventions they are really passionate about the book, it’s not written just to cash in, it’s a world they have created and a story they just need to tell, I think it’s that magic which has attracted so many fans.

The rewards for the Metal Made Flesh Kickstarter campaign are really unique too and like nothing I’ve seen on a crowd funded comic. They have their own custom Hot Toys style figures, 3D printed replica guns and ships from the series along with limited edition reprints of all the previous books.

Although Metal Made Flesh is an indie book it’s one of the most innovative and professional series I’ve read this year and part of that comes from the mix fresh creative minds from the creators and the comic pros who they have on board helping create this masterpiece.

Vengeance is the third in the series, centering on Phaeon Nex’s quest for revenge. It’s also the first story where all three main characters are in the same storyline. 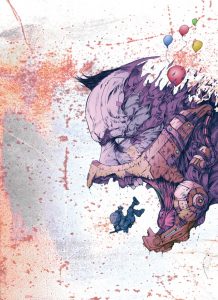