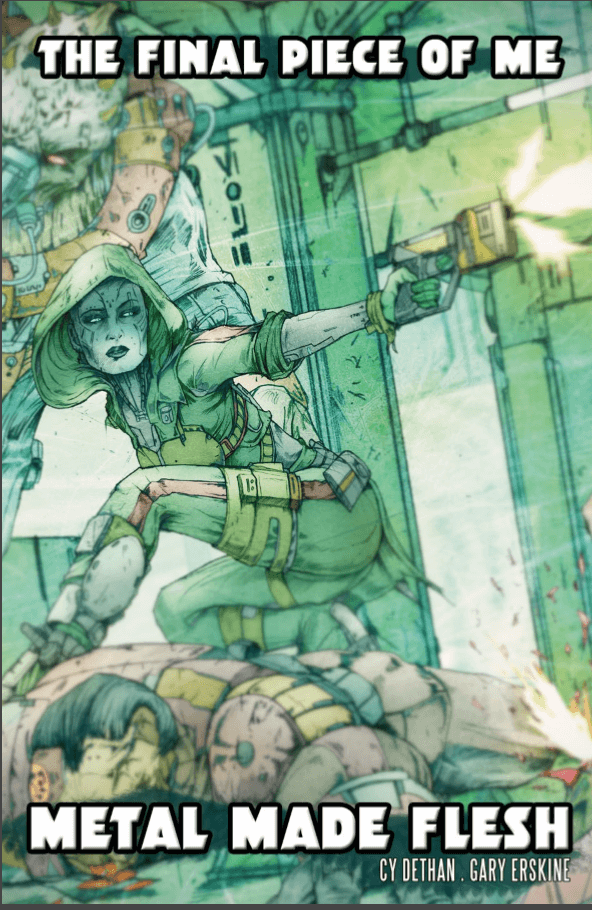 Over the last few years I’ve seen a lot of indie comics leap in quality, to the point I’m not sure where the line between indie and high level professional comic releases is. Metal Made Flesh is one of those indie comics which was an amazing hit last year and this year is back with a bigger volume two.

It’s from Subversive comics an indie publisher I’ve had my eyes on for the last few years, they have produced several comics which could fit in well under the imprint of Vertigo, Icon or Image comics.

The first three issues of Metal Made Flesh were a massive hit and have sold issues world wide, they were also collected in a volume with extra material which you can still buy Metal Made Flesh Volume One on the site for those wanting to catch up on the story so far.

The premise of this story is that in a not too distant cyberpunk future the Earth has been at war with an alien race and lost. There are a few people from Earth left all battling for survival on a distant planet called Tuaoni.

This story follows a Cyborg named Izobel Vice who needs a lot of money to maintain her now mostly cybernetic body. There isn’t a legal way to do that so she does a lot of jobs doing hits on people an letting people hit on her in a different way.

The original story was a Graphic Novellia written by Jeremy Biggs with the overall concept and artwork by Simeon Aston both of which will be big names in the comic industry in the next few years. For volume two they launched a kick started and got help from a few seasoned pros to help make sure they could get three sequential issues out early this year. This issue has artwork from Gary Erskine (2000AD Marvel, DC, Dark Horse) and is written by Cy Dethan.

Bringing on someone like Gary Erskine was a great move, he’s worked with just about any comic publisher I can name and has done an amazing job of bringing us the first sequential comic of Metal Made Flesh. He’s really mastered story telling through illustration which is a tough technique to pick up. It’s also amazing to see how he draws aliens, cyborgs and all the details in between to such a high consistent standard. If the rest of the volumes artwork is this good it’s going to be a very popular book this year.

The story Cy has written moves at great pace and tells a fairly intricate story, I think I had to read it twice to pick up on some of the details on who was who and what everyone’s motivations are. The story he has written fits in well with Jeremy’s original style being very high quality science fiction. It’s a very original story and I love how they don’t pull punches with this series. It’s indie and they are making it for themselves being fans of movies like Aliens and Blade Runner and I’m glad they have found a way to share this awesome world with us.

It’s a very different pace to volume one, mainly due to this one being in a totally different format. Both work very well to tell the story and it will be exciting to see what direction they take with the next volume. I’m hoping they manage to combine both formats somehow.