Metal Made Flesh #3 by Subversive Comics 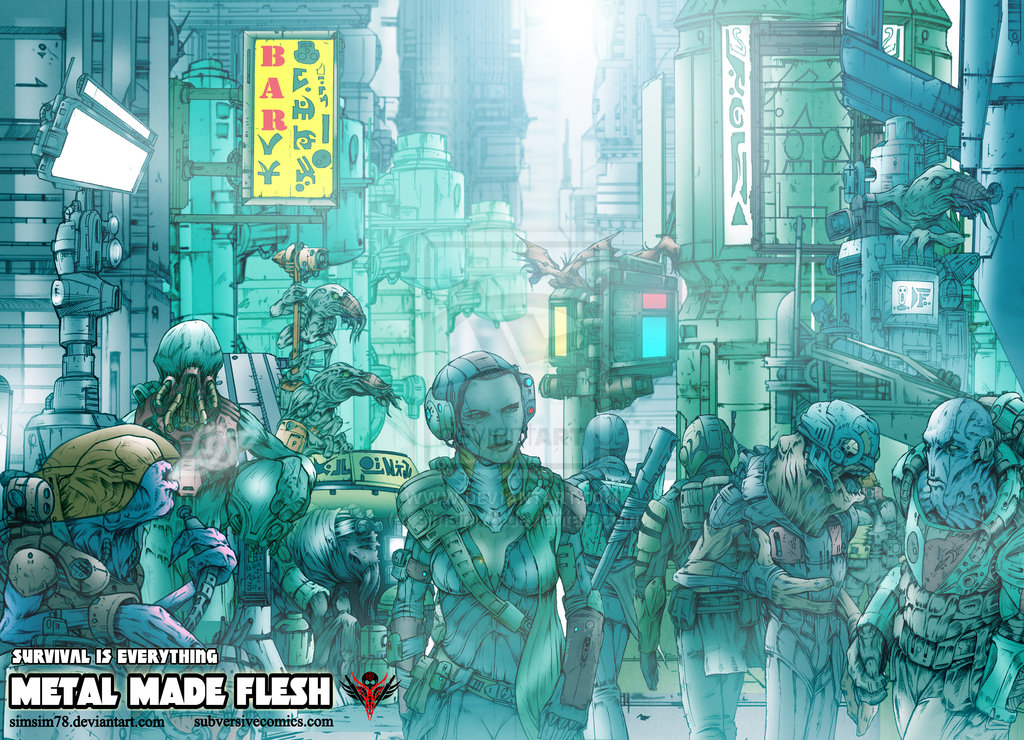 Metal Made Flesh #3 by Subversive Comics

When I first heard of Subversive comics it was when they released Bearlands last year, it opened my eyes to just how good indie comics could be and how much publishers like DC and Marvel could learn from them.

Subversive comics have done some amazingly original comics and they are one of the indie publishers you know will be huge one day and are one to watch. This and Bearlands will be going in my bagged collection with the likes of the DC 52 and Amazing Spider-man #700.

Metal Made Flesh was created by Simeon Aston who also did the amazing art work and it was written by Jeremy Biggs who also wrote Bearlands. Both with immense skill, I don’t know how Biggs manages to master both cute-horror and Sci-fi epics but he has done an amazing job.

The series is three issues starting with the third “Flesh”. Each one tell the origin of an assassin based in the distant future. This one introduces Phaeon who is a hand picked assassin who goes deep under cover to get past security and kill his target. Part of the disguise is to transfer his consciousness into the body a weaponized child clone and infiltrate a show to make his hit on live TV.

The artwork is similar to series like Image’s Elephantmen / Hipflask with the whole gritty futuristic setting where technology has improved but society still has a lot to catch up with. I’m really loving the style of art and maybe wish there was more of it in the book. The comic itself is about seven full pages of artwork surrounded by about 16 pages of story. It’s not a comic with the whole speech bubble and panels style, it gives you room to take in the artwork and the story separately. That being said the story and artwork do go together seamlessly to the point where you read a double page spread and the next page is exactly how you imagined it to look.

The story still being very original seems to merge elements from a few awesome influences from Blade Runner, Ghost in the Machine and Chucky. All of which are great on their own but in Metal Made Flesh it takes the best bits from them all and gives you a modern comic sci-fi series.

The future of the series will release issue one and two of Metal Made Flesh in which order I’m not sure but the next is due out about May and then once all three origin stories are out it will lead onto another series called “Hunters” where the three meet up and will probably kill loads of people with some twist at the end.

Overall if they keep up the quality of this issue it’s going to make one amazing Sci-fi epic Graphic Novel and hopefully let Biggs get back to finish off Bearlands. As mentioned before Subversive Comics are one to watch and well worth talking to if you see them at a convention this year.

If you don’t get a chance to meet Jeremy Biggs and the team at a convention this year Metal Made flesh is available online at Comicsy and will likely be in comic stores this year.

Further Reading: If you really want to get into another indie Sci-fi epic out this year take a look at Prisoner of the Mind which has similor themes.