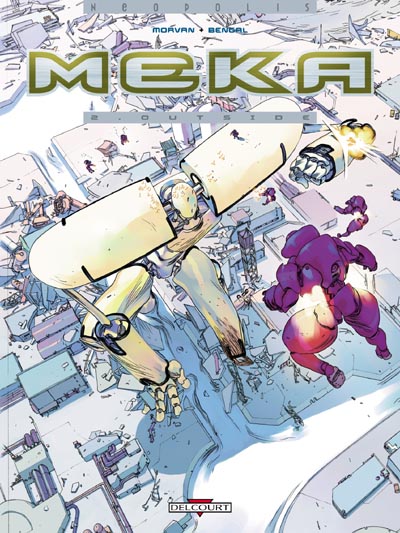 "An original story with an original point of view"

With a title like Meka I’m pretty much sold before I’ve even seen the cover. To find it’s not your usual super robot tale of who has the most guns was a nice twist.

The story was originally written by JD Morvan (Sillage, Zaya) and illustrated by Bengal (Naja, Luminae) back in 2004 in French. Now thanks to Magnetic Press we have both forty ish page books combined and translated in one awesome graphic novel.

The story starts at the aftermath of a giant robot battle over a city. The two pilots of one robot find themselves stranded after their ride gets damaged. Unable to fire a signal or get in contact with support they walk the battle zone and explore the real truths of war.

The author JD Morvan is an award winning Franch comic writer who has written a few science fiction books and draws his influences from both comics and manga sources.

Reading this really opened my eyes to a whole different angle of telling a story. It’s all self contained and in the 94 pages or so you get introduced to these two pilots and see how they change their attitudes from one scenario to another. There is no ridged characters in this story, they all adapt and evolve to each situation. It’s amazing how much story Morvan has managed to fit in this book.

The artwork is done by French artist Bengal who has worked with Morvan on a few project. Bengal also combines the regular comic art with more of a manga style and has developed a very unique way of drawing comics. I love the unique style used to illustrate everything from the giant robots to buildings and characters, its a very organic style of drawing.

There has been a lot of interest in translated comics from France with the most popular recently being Blue is the Warmest colour which even got a movie. It’s like an un tapped gold mine of comics and with publishers like Magnetic Press doing the ground work, translating and bringing it to us I’m looking forward to future releases and a lot more of both Morvans and Bengals work.

Overall I would recommend this one to anyone wanting to read something new. It’s easy to get into and all self contained with both volumes collected in this one book.