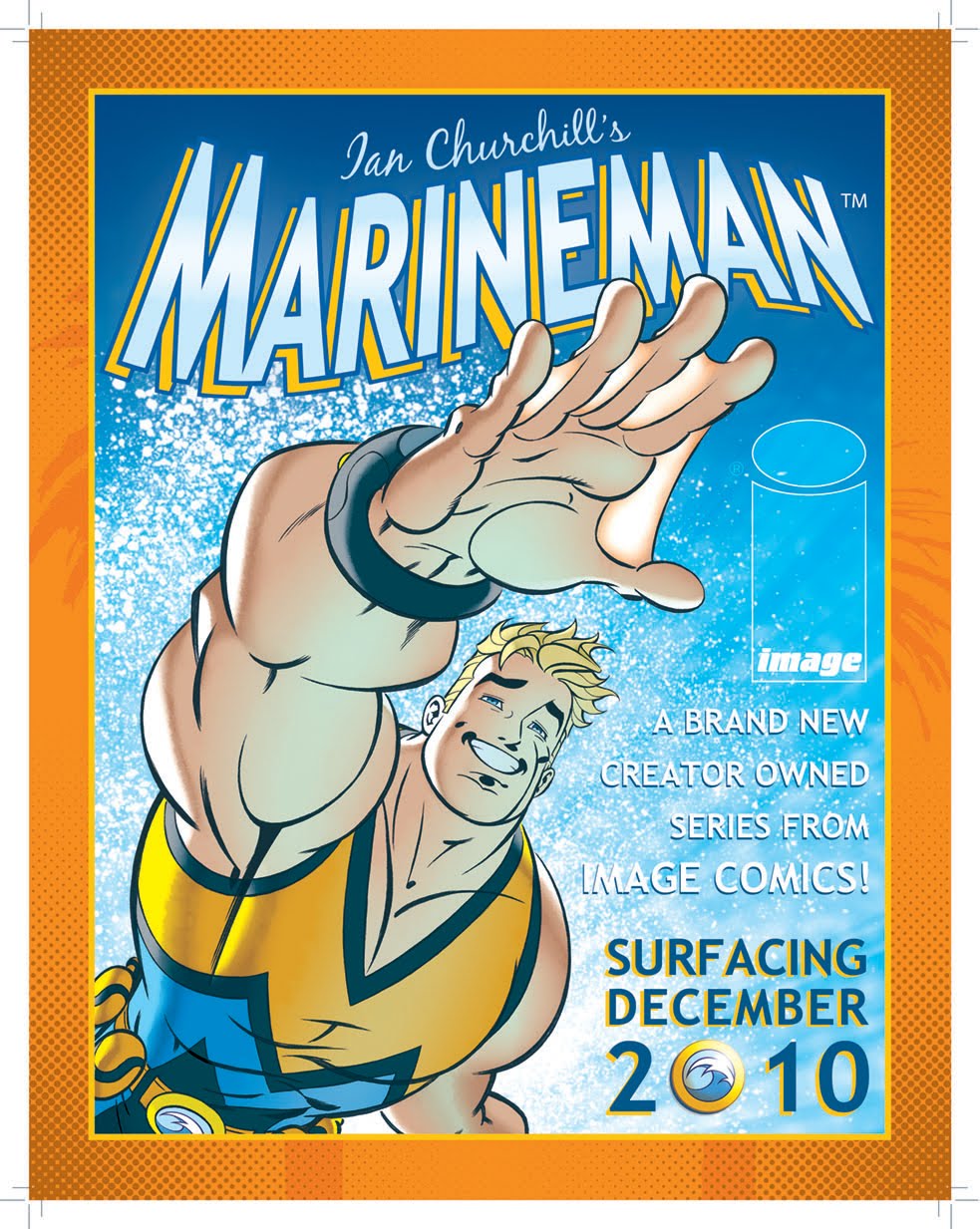 Ian Churchill has been in my top 5 list of comic artists for a few years, He did some awesome work on Supergirl which gave the series a real push in the right direction he’s also contributed a to the awesomeness of Elephantmen in the last few years. He has real talent to capture super heroes at their best and had developed a really recognizable drawing style similar to Michael Turner’s work.

Marineman is penciled, written and even done some of the coloring is done by Ian Churchill, and this comic is very much not only creator owned but made in almost every way. Till Ian learns how to print his own comics then he can be his own one man publisher.

The comic is about a marine biologist called Steve Marineman Ocean who has a TV show. The character is based on an old style of shiny happy super heroes; the comic is fairly slow paced for the first issue which I’m guessing will be to lead up for something but for a first issue you really don’t get to see much action. I’m going to give it a few issues as it could turn into something really big but only time will tell us where Churchill wants to take us with this series.

I was both excited about the artwork and skeptical about the story when I first picked up Marineman. The front cover doesn’t shout Churchill’s usual work and it seems that he has almost reinvented his whole signature drawing style which is cool but I still haven’t gelled with it.

The writing is also a big surprise, again I wasn’t sure what to expect but every page gives something to the story with very little filler. Very much not what I would have expected Churchill’s writing to be it’s almost like he has had to work with other peoples characters for so long he wants a change and finally gets to do something that’s totally his way.

I’ve also been rereading my collection of Frank Miller books over the last two months and picking up Marineman has been a total change. Marineman’s world is full of sun smiles and learning about marine biology.

I love the fact Ian has managed to bring his child hood creation to life finally after years of working on other big characters but I just don’t recognize his work in this book. If you want the Ian Churchill who did X-men, Supergirl and The Coven you might not get as much out of this book.

I will hold on for a few more issues to see what happens, I have been a fan of Ian’s work for a long time and hope this bud of an idea opens out into a kick ass creator owned series. It is a very original project and although it’s not what I expected it is still very impressive work.