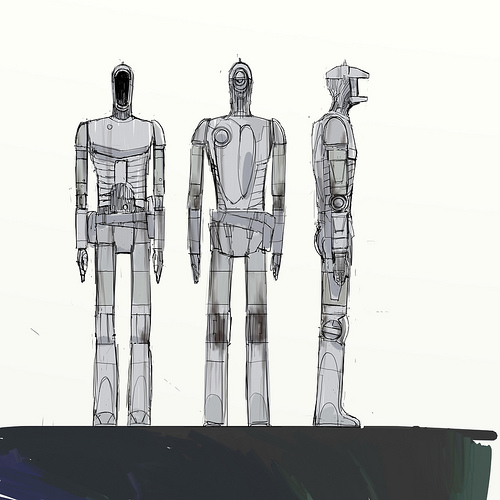 I have been looking for a chance to add some web comics to the site and Manmachine our first. I only came across this one about a month ago from first glance the art work has that wow factor you find in comics sometimes. It’s like the Arkham Asylum of webcomics.

Manmachine takes place in the not too distant future and follows a world which was run my corporate greed and inhumanity which is now a desert full of danger.

I have always loved post apocalyptic stories which feature a robot with a soul, ever since the days of SCUD. The concept of giving human feels to a robot never gets old as its just a cool concept that takes a lot of imagination. To think after the end of the world as we know it robots still have girl friend issues.

Manmachine isn’t a weekly instalment comics but a full graphic novel on-line. The comic its self would benefit greatly in print and fingers crossed it will be in the not so distant future. It might even suit an anime style movie or two.

The first issue of Manmachine gives a great introduction to the character and keeps you thinking about what could happen in this new world.