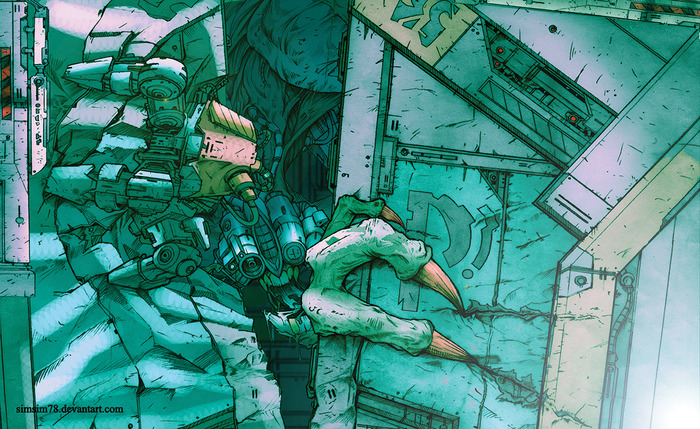 Made is the next offering in the Sci-fi Cyberpunk novella series Metal Made Flesh. The first in the series titled Flesh was a massive success last year at comic conventions around the UK and the team behind it wanted to do something big for the fans moving forward. To get the next two books finished quicker Submersive comics ran a Kick Starter project which aimed to raise £3000 ended up making £14,682 which went towards T-shirts, posters and a limited edition hardback.

Now with the first batch of Made fresh off the printers here’s a review of the second in this sci-fi epic series.

Each issue in Metal Made Flesh is a stand alone story but they cross over slightly and will hopefully merge into one bigger series once phase one is complete.

The setting is a not so distant planet in the future, the human race has almost been wiped out by an aggressive alien race called the Veul. Most of the surviving humans live along side countless other species of aliens on Tuaoni and have various roles from royalty to general sewer vermin.

The world is run by numerous alien races with the most powerful and menacing at the top of the food chain. Simeon Aston and Jeremy Biggs have created an awesome sci-fi world which I can only describe as Game of Thrones meets Star Wars with the best bits of both.

It’s a really unique sci-fi series in the sense it’s just aimed at adults, it’s got extreme violence, bad language and every time I read an issue of the series I learn like ten new words. It’s a very immersive story and you really get a sense of being in their shoes be it Kalibos the one handed shape shifting monster or Tanim who has a pretty wild weekend.

The artwork Simeon has put together has amazing detail and really helps you keep up with the story. Like I said the story Jeremy Biggs has written goes into a lot of detail into each character and the surroundings and paired with the graphics it’s like the story is in HD.

So far both Made and Flesh have been awesome reads and Metal which will be released shortly is tipped to be the best of the three.

Overall it’s a must read if you like classic sci-fi epics like Blade Runner or Star Wars or just want to read something new and fresh.