A Link to the Past – Zelda Manga 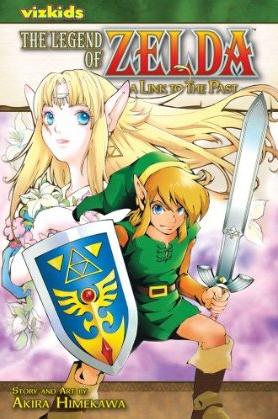 Maybe one of the most tempting and must read Manga for any RPG fanatic. The Legend of Zelda: Link To the Past was released nearly twenty years ago and is still regarded by many as one of the greatest games ever made. The graphics were pixel perfect and the story at the time was one of the most well thought out RPGs made.

The Zelda Manga series are all based on events from the games with a few details added to help fill in the story and make it more reader friendly. They are all written and illustrated by Akira Himekawa who are a Manga creating duo comprised of A. Honda and S. Nagano who also made some of the recent Astro Boy books. I’m not sure why most manga artists are called Akira, maybe it’s a tribute to the Akira series but if you know for sure let me know.

For nostalgic purposes the book is amazing. It brings back so many memories of complete weekends battling through Hyrule from when I was younger playing it on the SNES. The story does seem to race through a lot of the major events from the game and could have benefited from taking its time and maybe making the story into several books.

It starts off in a similar way to Dragon Ball following a young boy with the world on his shoulders. Link wakes up and loses his uncle and only family to the evil force of Agahnima a power hungry wizard. He then gets thrown into the quest for the Triforce and as a part of the adventure finds out about the true history of Hyrule and his family.

Artwork wise they have done an amazing job of bringing those 16 bit sprites to an instantly recognisable comic format. Each page brings something new to the reader from a manga version of all the villains to each of the forest folk. So far I’ve loved reading manga if you ever need inspiration for something to draw both Dragon Ball and Zelda would make a great muse.

The only thing that I feel lets this book down is the almost machine like translation. These are fairly new translations and haven’t had t dozen or so revisions books like Dragon Ball have to translate the story and the individual linguistic traits of each character.

Overall if you were a fan of the game it’s a must read, if you haven’t played the game get that first. The translation and lack of humor does let the book down to the casual reader.