The League of extraordinary gentlemen 2 review 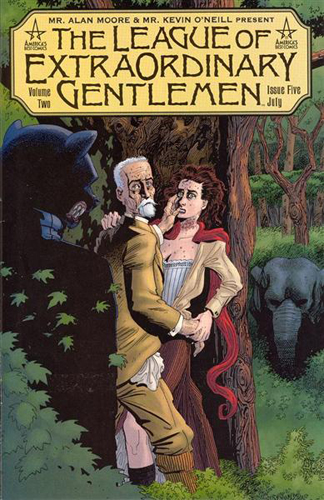 The League of extraordinary gentlemen was a unique story which was almost like a Victorian Avengers. With characters like Nemo, the invisible man and Mr Hyde you almost feel like you should know the characters already.

With Alan Moore‘s research into each of the legendary characters he has put a darker slant onto each personality and by making them work as an odd ball team it makes it one of the most creative Graphic Novels in print.

Where the first book introduced all the characters the second volume really puts strain on the characters relationships they drift apart without a common goal.

The second volume of The League of Extraordinary Gentlemen takes place during H. G. Wells War of the Worlds. Martians have invaded England and as usual London is the first place on the attack agenda.

The second volume also seems to have even more annotations associated with it than the first. With starting with it being set in the middle of the whole War of the worlds to the unexpected appearance of a Rupert the Bear as a mad scientists experiment.

If you were a fan of the first volume volume this is defiantly a must read for Alan Moore fans. It has his darker sense of humour all the way through this book.

Although after reading this volume I am a little fearful of picking up the third instalment as this one pretty much breaks up the team by brining out the worst and best in each of the groups personalities.

Reading Alan Moore’s work such an V for Vendetta and Watchmen it’s obvious that he likes to blow open the whole stereo typical super hero genre and show readers something new which is what LOEG is all about.