League of Extraordinary Gentlemen Volume one 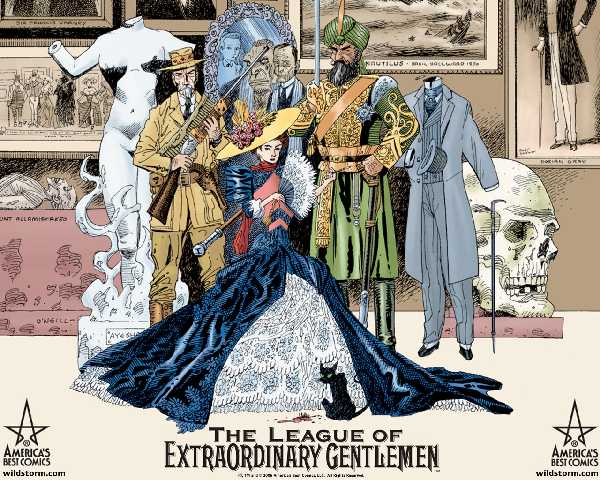 Just finished this classic written by the man who brought us Watchmen – Alan Moore. Like a lot of people I was put off for so many years due to seeing the movie. Although after reading the first volume you may think how the movie and book are related. They have some of the same character names but I didn’t see much of a connection between the book and movie other than that.

It’s set in 1898 which Moore has played on with great success. The dialogue doesn’t just bring out each accent but also an accent from the 1800’s which at times can make it hard to follow but brings so much depth to the book.

If it had to be compared to any other stories League of Extraordinary gentlemen would be a cross between the modern day Avengers and Sherlock Holmes. The first volume introduces you to a whole re-invention of old character you will know but with different back stories.

The first few issues follow Mina Harker and her adventures in recruiting the group on behalf of British intelligence to find a stolen anti gravity device. She begins working with Captain Nemo who is a wanted man in most countries.

With Captain Nemo’s ship she travels to Africa to recruit Allan Quatermain who is played by Sean Connery in the movie. He is a frail old man who is still considered to be a real hero with experience in adventure and hence needed for a successful mission.

Together they then move to Paris to follow reports of a serial killer who turns out to be Dr. Jekyll, he is a very troubled man with more anger issues than the Hulk and Batman together. He is probably the most lovable character of the story and works on his anger issues by taking out his frustration on tearing up all the bad guys with great joy in his eyes.

They then move on to recruit Hawley Griffin aka the invisible man, they find him when they investigate reports of girls getting pregnant in an all girls school. It was thought to me an holy conception. Once they capture him he has no choice to join if he wants to be pardoned for his crimes as the invisible man.

It’s a great detective story with some amazing dialogue and awesome reinvention of come classic well known characters. Victorian England has been a big focus for a few of Alan Moores stories and he has a history of making great fictional historic comics like V for Vendetta and from Hell.

The artwork by Kevin O’Neill is also something pretty original. Although at first you think its nothing special, he does an amazing job on bringing out the Victorian feel and every few panels has memorable facial expressions from Mr Hyde’s eyes while he tears up a terrorist or when you first see the air ship towards the end.

It comes highly recommended for anyone looking for something new and wants to be eased onto a wider spectrum of comics after reading about mutants and capes.