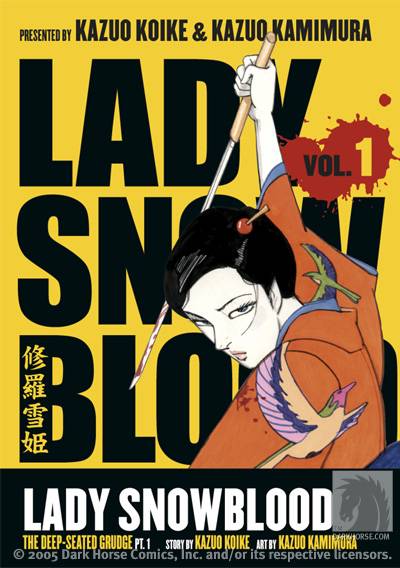 "Revenge, assassins, swords and sex in this violent tale of one girl and her mission"

In 1971 a Japanese writer named Kazuo Koike wrote the manga version of the Incredible Hulk, the year after he wrote Lady Snowblood the one manga which should have had at least two of those parental advisory stickers on.

For being such an amazing manga  it took a while to get translated into English. This one comes to us thanks to Dark Horse who released the English version in 2005. If you haven’t read any manga before and wanted to try a book out you can’t go far wrong with a Dark Horse book. Whoever selects what manga they publish is doing a great job of bringing some amazing classics like this and Gantz to the west.

Lady Snowblood probably falls into the revenge genre more than anything else. If you like movies like Old Boy (or the original manga) or Sympathy for Lady Vengeance you will probably like this book a lot. The story of Lady Snowblood makes the Quentin Tarantino’s Kill Bill look like a Disney princess movie.

The story follows a beautiful and skilful girl who was born with a destiny of vengeance. She used her skills in her day job where for one-thousand yen she will take out any target using her sex appeal and any bloody methods at her disposal. Her mission of vengeance is inspired from her father and brother being killed by a group of criminals. Her mother then ends up in jail for life with no way of evening things out. Her only chance for revenge is to have a baby who is born free and can take the lives of those who killed her family.

The full story is four volumes but from reading just the first I’m so hooked on this series. The way it’s written with a great pace and is really well set up. Most of the chapters start out with some crazy violent situation and then goes back to explain how it all unfolded.  Lady Snowblood aka Oyuki is an amazingly original and well thought up character. She like a super dark anti hero, yeah she’s a paid assassin but her targets all seem to be bad people who she takes out on her road to vengeance.

This book symbolises everything I love about manga, the general comics publishers like Marvel and DC put out are great but sometimes you want to read something totally new and that’s where these classic manga stories come in. You get so much story in just the first volume. It’s like  the coolest history lesson ever written.