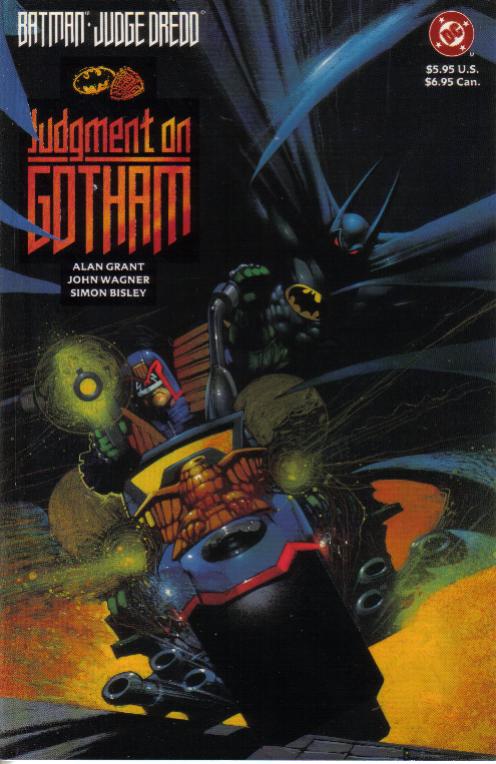 The ultimate law enforcer Vs the vigilante detective.

This is an amazing introduction to Judge Dredd if you’re a DC fan boy or girl. Published by 2000 AD and starring the Dark Knight himself.

The story begins with an evil spirit judge called Judge Death who travels from Judge Dredd’s dimension using a piece of stolen technology. Since this is published by 2000 AD the Batman and Gotham city are fairly different places than when under DC ruling.

When Judge Death arrives in Gotham City a few cops get caught in crossfire until Batman arrives. Batman then gets teleported to Judge Dredd’s world and runs into Mean Machine and Dredd himself. Mean Machine then gets sent to Gotham with the stolen dimension crossing device leaving Batman to get arrested by Dredd.

Dredd and Batman don’t get on and Batman nearly gets sent to prison, without spoiling too much of the story you get introduced to a few other characters as Anderson the hot female Judge with telepathy and the Scarecrow teams up with Judge Death for a truly dark team.

The artwork is by Simon Bisley who has done an amazing job on this book. He’s managed to keep both DC and 2000 AD fans happy with interpretations of the characters which sit well with die-hard fans from each side. You can tell he really loves drawing some of the darker panels with Judge Death and Batman. It might also be worth mentioning that Judgement on Gotham is printed in the European style comic which is bigger than the average DC Batman comic.

The story is written by Alan Grant and John Wagner who have both done work for DC and 2000 AD in the past. It’s a well thought out plot which fits a lot into the fairly short TPB. You get a good introduction to both worlds and each of the characters along with tying up the whole story.

One thing I would have loved is a Planet of the Apes twist at the end where they realized it wasn’t another dimension but a time machine which would have been an awesome twist but it’s still a pretty amazing story and well recommended if you find copy.