I Zombie from Vertigo 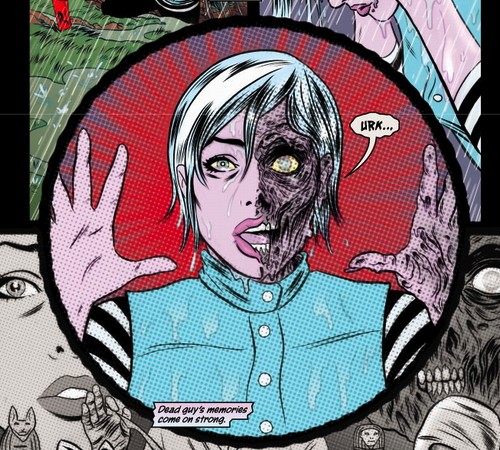 i-Zombie was totally off my radar till the helpful guy at the local Travelling Man comic store recommended it as one of the hot comics at the moment.

It’s the latest monthly title from Vertigo, the publisher that brought us Watchmen and Sandman so you know it’s going to be of a high calibre comic talent.

i-Zombie is written by Chris Roberson who has done a few comics for Vertigo including Cinderella: From Fabletown With Love. It’s an original story and probably not what you would expect from a zombie themed comic. So far from the first two issues the whole zombie thing has been kind of a side plot which I’m sure they will catch up in future issues.

In the first two issues you get introduced to Gwen Dylan who is the zombie grave digger with a mission to help the dead fulfil their last wish. Ellie – Gwen’s best friend and ghost from the 70’s and a group of lady vampire paint ballers.

Gwen is a zombie, but she’s not the dawn of the dead type, she has a normal ish life but has to eat human brains once a month to prevent her changing into a mindless zombie. So she doesn’t have to kill for her brain’s she digs grave’s for a living to cover her tracks. Once she eats the corpses brains she gets their memories for a week which she used to solve crimes Ghost Whisperer style.

The artwork is done by Michael Allred who is probably best know for his work on Madman and he has done an awesome job on giving each character their own identity and setting the scene, just when you think you have taken in all the detail of each panel you can look a bit closer and see a whole new layer.

I’m not normally a fan of collecting monthly issues an prefer to pick up complete volumes but I definitely recommend taking a look at i-Zombie, you should be able to still find the first two issues in your local comic shop and if your looking to start getting into a new monthly release get it while you can.