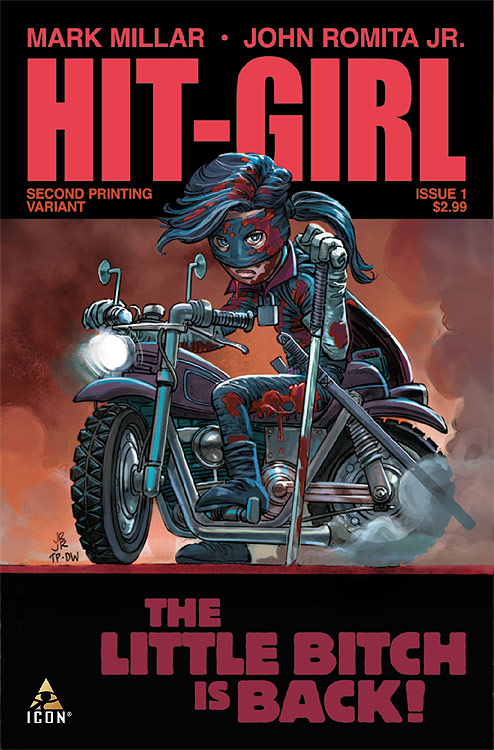 One of this months most epic buys has to be Hit-Girl #1, it’s probably the most successful spin off since Frasier and a great contender for comic series of the year.

Mark Millar and John Romita Jr have created an awesome universe through Kick-Ass and the latest offering Hit-Girl brings us back to the roots of the original story in a slightly turned around set of events.

The Hit-Girl series takes place between Kick-ass volume one and two. Where as Kick-Ass followed a school kid wanting to be a super hero the story shows us life from the other side as Hit-girl tried to rehabilitate herself from being a super hero to trying to fit into school.

With the story and the artwork they follow suit from where Kick-Ass 2 left off with a slightly more edgy and darker setting to the story than the first series.

The first issue hasn’t had the PR that Mark Millars series like Superior had previously but has still managed to sell out two printings withing two weeks of first being released.

One thing I love about this series is Mark Millar probably already has a movie deal for the comic so it’s not written with that movie bait edge that a lot of his comic series start off with. He’s a really great writer and I love how he wants to contribute to the whole comic industry and promote it with his work.