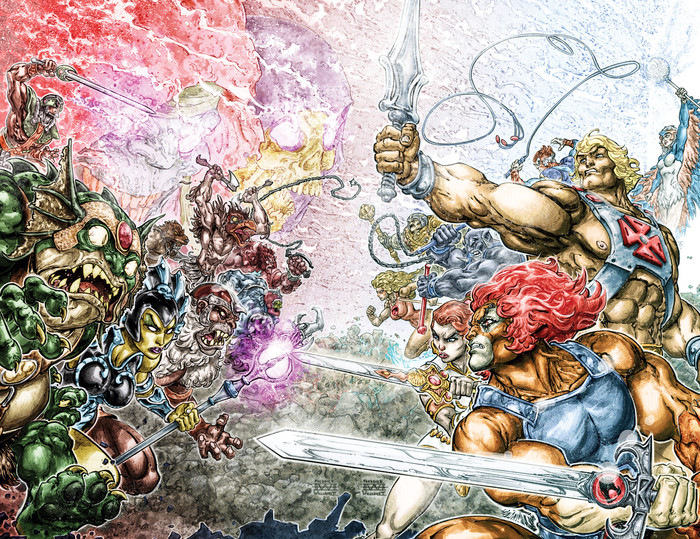 "The ultimate tribute to 80's cartoons"

If you were a child in the 80’s this could very well be the best comic out this year. DC have been printing He-man comics since 2012 when they took over from Dark Horse and every one I’ve read I’ve liked. They have put together great artists and writers to make a comic fans of the original show will love, they haven’t tried to rewrite the original story but have adapted it and brought life back to these iconic characters from Eternia. When you throw Thundercats into the mix you have a winning combination.

Unfortunately both Thundercats and He-man have struggled to keep a long running TV series going in but both franchises live on through comics and some very popular toy lines.

The comic starts off with a fairly familiar scene as Mumm-ra talks to his ancient spirits of evil to ask for help. This is where the clever bit happens. To defeat Liono’s Sword of Omens he needs an equally powerful sword, enter He-man’s sword of power. Mumm-ra uses his evil powers to pull both planets within sight in order to steal the sword of power.

In the first issue we see Mumm-ra and He-man face off, it’s an amazing introduction to each other as fans of MOTU will see something they probably wouldn’t in any TV show. I think that’s one of the greatest things about comics based on TV shows and movies, the fact you can see things they wouldn’t have budgets for or even be able to do without an 18+ rating.

The writing team of Mattel Head Writer and MOTU Lead Creative Rob David and Supervising Producer Lloyd Goldfine, with all-star artist Freddie E. Williams II (Batman/Teenage Mutant Ninja Turtles). With the comic in the hands of this team we know it’s going to be pretty loyal to the original source material and give fans what they really want to see.

Again DC have done an amazing job with building up He-man over the last few years, he even took out a possessed Superman at one point to empathise he is the most powerful man in the universe.

Overall this series is going to be such a joy to read, the artwork is great and to see He-man team up with Lion-o and Skeletor to team up with Mumm-ra there is so much in these pages to love. The only down side of this series is that it’s only a six issue mini series so far.