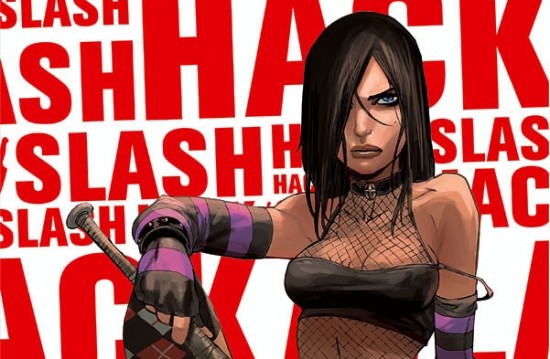 Although I love comics which keep you thinking long after you finished reading them, sometime it’s cool to just sit down with a comic like Hack Slash and marvel at the awesome characters and see what kind of crazy trouble they can get into.

Just when you think its safe to judge a comic by the awesome girl on the cover – Hack Slash backs it up with a super lovable two main characters.

Cassie Hack is the main star of the comic, her background story kicks off when her own mother is an un-dead slasher who kills students in Cassie’s school. Cassie brings her own mother down and in fear of turning into a slasher her self she decides to become a slasher hunter.

I think part of the appeal behind Cassie Hack is she’s a hot geek type who for some reason doesn’t have much luck with guys. She also has the whole Buffy the vampire slayer vibe about her as she is still acts fragile but also hacks up monsters for a hobby.

Cassie also gets help from Vlad who is the muscle of the team. He is also a huge disfigured dude who Cassie was hunting at one point as she confused him as a slasher, the pair then join up to hunt the un-dead killers from horror movies.

I can’t recommend this comic enough, I’ve only read the first volume so far but it looks like it has good foundations and a great creative team behind the story. The crazy mutated slashes by themselves could fit into a Preacher comic with ease.

It could be the bet work I have read yet from Tim Seeley and DDP. It’s also pretty easy to catch up on if you have read the first one as it seems to be mainly based on 2-3 part short stories which would have made a freaking amazing TV show.