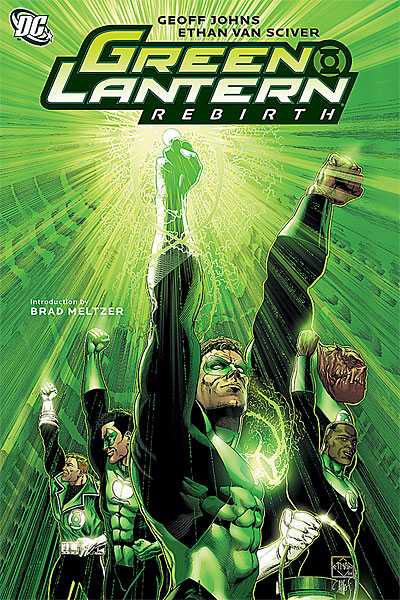 First wow, Green Lantern Rebirth is just an amazing book. I don’t think I have read anything so awesome since the Death and Return of Superman. It’s a total classic and really pulls the whole Green Lantern mythology back into play.

Previously I haven’t read much Green Lantern. I knew what they could do and the basic background but never wanted to invest too much time into finding out more as I already had my hands full trying to catch up on decades of Batman and Superman.

One thing I haven’t always agreed with in DC comics is how large some of the story arch’s can be, the whole multiverse seems to be still going on and there are so many Batman titles out each month I’ve lost interest in reading any as I can’t catch up with them all.

Green Lantern Rebirth on the other hand is just totally mind blowing, in a five issue volume you get an introduction into each of the Green Lanterns, the resurrection of two and complete back story into where the power comes from. Geoff Johns has really done an amazing job of telling this tale in so few issues.

The story starts off with the only remaining Green Lantern – Kyle Rayner still patrolling the universe when he comes across a planet in need. The locals then warn him that the Parallax is coming, he only knows the Parallax as being Hal Jordan. Similar to when Jene Gray became the Phoenix, Hal went power crazy and became the Parallax a yellow bodied dragon like life form which has fed on fear and doubt since the beginning of time.

Long story short this story pulls back Hal from death and a really bad reputation. It explains decades of DC comics in the space of five issues and makes sure you finish it understanding the current and past Green Lantern mythology.

It’s a great starting point for anybody wanting to catch up on one of DC comics most legendary characters before the movie comes out next year. But I will warn you it may cause over buying as its left me in huge need for Green Lantern awesomeness.

DC comics should really issue warning with comics like this as it will likely inspire a comic Green Lantern comic buying binge over the next few months.

Things you will find out in this book

Green Lantern Rebirth doesn’t just go over the resurrection of Hal Jordan the most powerful off all Lanterns but it restores the whole Green Lantern Corps and pulls back together the Justice League, while also filling you in on all the details.

The only thing I would have changed is stretch it out a little, so much happens in the five issue miniseries it’s like cramming two decades of comics into one awesome graphic novel. It’s all thriller and no filler.

Green Lantern : Rebirth comes highly recommended to any comic fan wanting to catch up on Green Lantern and the mythology behind one of DC comics most legendary characters. I really think the movie could put the raise the bar for comic book movies and could even over awesome the Dark Knight movies.