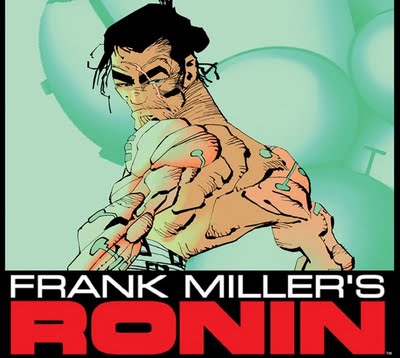 Frank Miller is one of my favourite writers, his work on the Dark Knight Returns and Strikes again was what first really pulled me into reading comics.

If your a Frank Miller fan and haven’t read Ronin you really have to find a copy which shouldn’t be too hard, the comic was first published over 25 years ago, hasn’t had a move made yet but is still if good circulation in comic shops.

The basic story is based an ancient samurai who’s master was killed by a demon called Agat, he then trains himself to grow stronger and kill the demon himself.

Tha ronin manages to fight and almost kill Agat himself but in the demon’s last breath he curses the sword and traps both the Ronin and Agat in the sword.

The story is set in a not too distant future with part bio-machine part cyborg telekinetic dude being possessed by a master-less samurai spirit. YEAH its that awesome.

The story has quite a few themes to it, but the strongest revolves around how powerful an individual can be on there own. The Ronin is thrown from 13th century Japan to a 21st century New York, he doesn’t speak the native language all he knows is everyone wants to kill him and he needs revenge.

I don’t want to give anything away but its like a cross between the last samurai and Robocop, which is great as Warner bros apparently own the rights to make a movie although the project has had a few rumours going back to 1998.

Unfortunately the Spirit didn’t do great things for Miller’s comics being made into movies, some just cant translate to the cinema screen and appeal to the general population. Although a animé style cartoon based on Ronin would be freaking awesome.