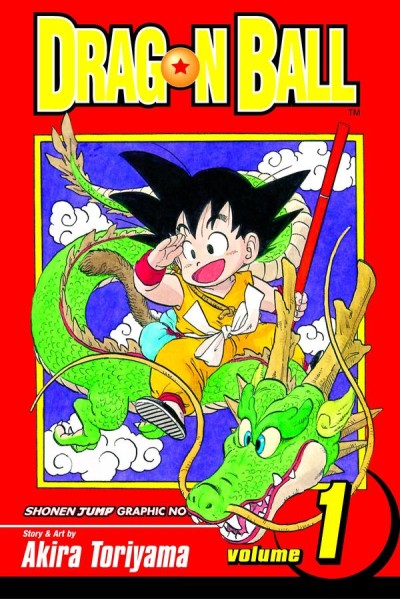 Like a lot of comic fan’s I’ve always been tempted by the wall of Manga int he local comic shop but only recently decided to give them a go. Reading in the right to left format can take some getting used to but it all adds to the pleasure of reading something new for a change.

For a first Manga Dragon Ball is an easy choice. It’s the original material the Dragon Ball Z cartoon was based on but the prequel story. It follows the early days of Goku an 11 year old monkey tailed boy who was raised in a sheltered life with his Grand Pa. Being raised by a legendary martial arts master and being a born fighter he struggles to fit in when he is introduced to new people. With the world left wide open to him he jumps at any chance to find adventure and fight he can.

In the first volume we get introduced to Son Goku, Bulma who is the first girl he has ever met. She introduces him to the world and the quest to find the Dragon Balls.

Bulma being the only female character for a while is also center of attention for Kame-Sen’nin who in the book is described as a dirty old man who later teaches Goku how to fight.

The story is both written and illustrated by Akira Toriyama when he was only 23. It’s an impressive task to be so well trained and a master of an art form at 23, Akira is a true legend when it comes to comic and Manga.

Story wise the first volume will get you hooked on Dragon Ball right from the start. It’s one of the most balanced stories I’ve read when it comes to humor, character development, relationships and keeping the readers interest. Dragon Ball was Akira’s second big series following Dr Slump which I’ve currently trying to track down too.

Art wise I’m left blown away by how much depth and dimension is created in each panel. Being printed in Black and White and in a much smaller book than I’m used to it’s a really impressive book. If you’re tired of throw away comics or graphic novels which are written to make a movie this is a well welcomed break. It brings the whole art form of graphic novels into prospective and is a great example of a modern day masterpiece.

It’s also been a great how to draw or write book, there are no guides obviously but it just gets the creative thoughts going, I just couldn’t change a thing with this book, there isn’t a line drawn out of place and it’s very well translated by Viz Media.