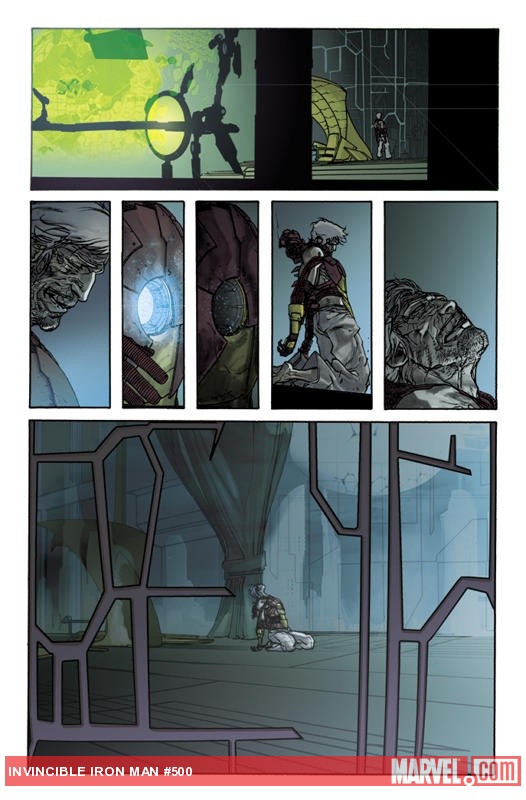 We have seen a lot of epic comic stories in the last few years. The death and return of Batman, issue 900 of Dead Pool all seem to be nothing compared to the surprise death of Tony Stark coming January 19th 2011.

In recent years with the success of the Iron Man movies and Avengers in the works. Iron Man has become one of the major icons of Marvel comics which makes this issues extra super epic.

The invincible Iron Man has reached his 500 anniversary and Marvel are sending the issue out with a bang.

The Invincible Iron Man #500 preview art by Carmine Di Giandomenico and Matt Wilson show what could be the last panels of the shell head himself.

48.1
TONY looks back at the hologram machine as it goes dead. ALL ELECTRICITY goes dead. The room suddenly dim, everything outside is dark. He’s lit only by moonlight and the fading glow of the hologram generator.

48.3
ON THE REPUSLOR DISC in his chest, sparking one last time, flaring up–

48.5
PULL BACK as TONY slumps down to his knees.

48.6
TONY falls back like a samurai with a slit belly. Resting back on his haunches, sitting on his heels in the dark.

Check out the coverage over at Marvel.com.