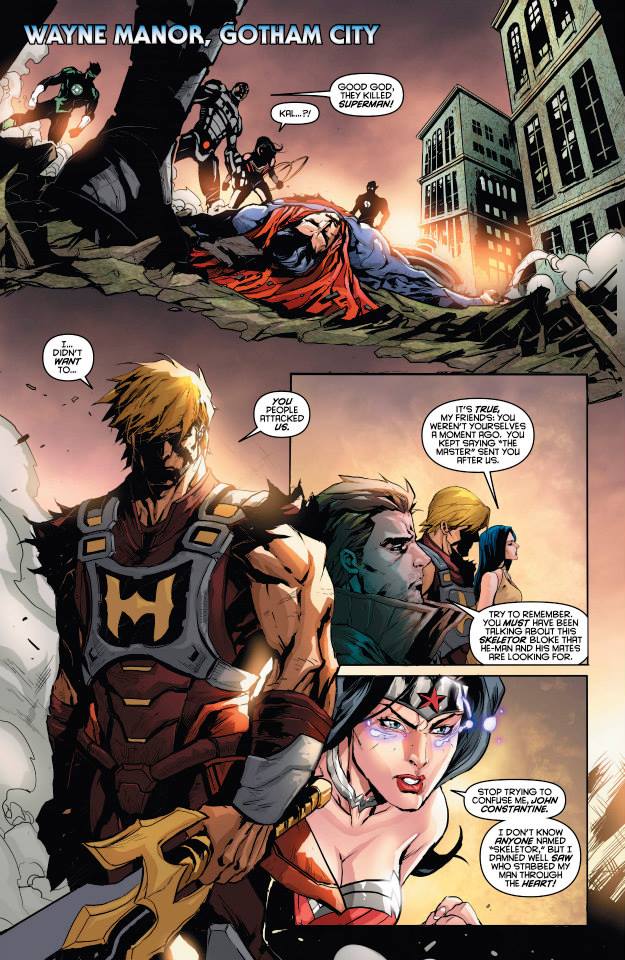 "He-man vs Superman is always going to be an awesome read."

With DC pushing te whole villain comics over the last few months it was easy to miss this mini series which brings the Justice League against the heroes of Eternia.

I totally missed this series at first and have jumped on with issue #3 and managed to track down the first two issues. Being an huge fan of the original He-man cartoon it’s been great to see DC bring back the Masters of the Universe to comics.

Superman and He-man have crossed paths a few times in the past but this so far is the best story going off the amount of action involved in a mini series featuring the first Death of Superman in the DCnU.

In the first three issues we have seen the main characters from MOTU along with the Justice League, JL Dark, JSA, Skeletor and an evil Orko. That being said the only thing that I find wrong with the comic is that it either needs to move slower or involve less characters. Most situations manage to get fixed by the MOTU just teleporting out of trouble and moving onto the next chapter of the story.

Artwork wise I love what DC have done with the new look MOTU I think they have been redesigned a few times over the last few years but the new look really makes them fit into the DC universe and a lot of fans really want MOTU tied into DCnU moving forward. I can’t imagine how cool a movie of He-man vs Superman would be one day and with film licences being bought up now I wouldn’t be surprised if it happened in the near future.

As the story goes it’s more than just using the main heroes of MOTU and sticking them in a Justice League comic where they team up at the end to fight Skeletor. Keith Giffen who has written comics for both sides was a great choice. He as made some really pushed the bar for cross over comics. The fight between He-man and Superman was short but eventful with an ending which cought my attention while flicking through issue #3 in my local comic shop.

Keith Giffen has written the series so far so it’s self contained but gives you the option to read more into MOTU if you want but you don’t need to know all the history to enjoy the story. Giffen has also made good use of the Justice League Dark as in this series magic rules all. For a six issue mini series it’s well worth a read if you are a fan of MOTU or a DC fan.