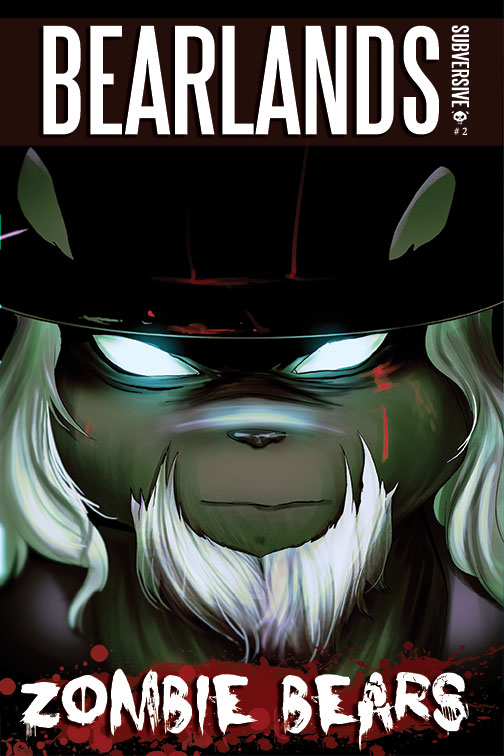 Indie comics have come so far in the last few years with some publishers putting out some amazing pieces of work. My favorite indie comics company at the moment Subversive Comics is about to release another issue of Bearlands with issue #2 “City of the Ted”.

If you haven’t read the Bearlands #1 I’d highly recommend picking up a copy. It’s not a comic you can enjoy with just the one issue as the first issue really set the whole landscape of the story up. It’s basically set in a world which is a cross between the Care Bears meets the Walking Dead. It’s a winning combination which sets it apart from so many comics out there at the moment.

Compared to the first issue this one seems to move at a slightly slower pace setting up some much larger up coming events. The issue has everything I loved from the last issue, a well written fun plot and Bakki’s amazingly captivating artwork which could sell the comic on it’s own.

Jeremy Biggs who also writes Metal Made Flesh really knows how to entertain through his words. Reading it you almost forget it’s about zombie bears and you grow just as attached to the characters as you do with characters like Glen and Maggie in the Walking Dead, then flicking through the pages it brings it all with a full pager of a pit full of zombears eating paws and eyeballs. It’s a very well made fun comic which is what all of Subversive comics are.

The only down side of Bearlands is waiting for the next issue. Like most good indie comics it’s tough to do a monthly release but with this I think it’s well worth the wait and I respect the team behind it a lot for not rushing it. When Bearlands releases it’s first TPB it’s going to make some huge waves in the indie comic industry and I hope it inspired some of the bigger publishers to try harder as comics like this kick ass compared to some of the issues I read of the new DC 52.

Take a look at the Subversive comics site for more on Bearlands and Metal Made Flesh.