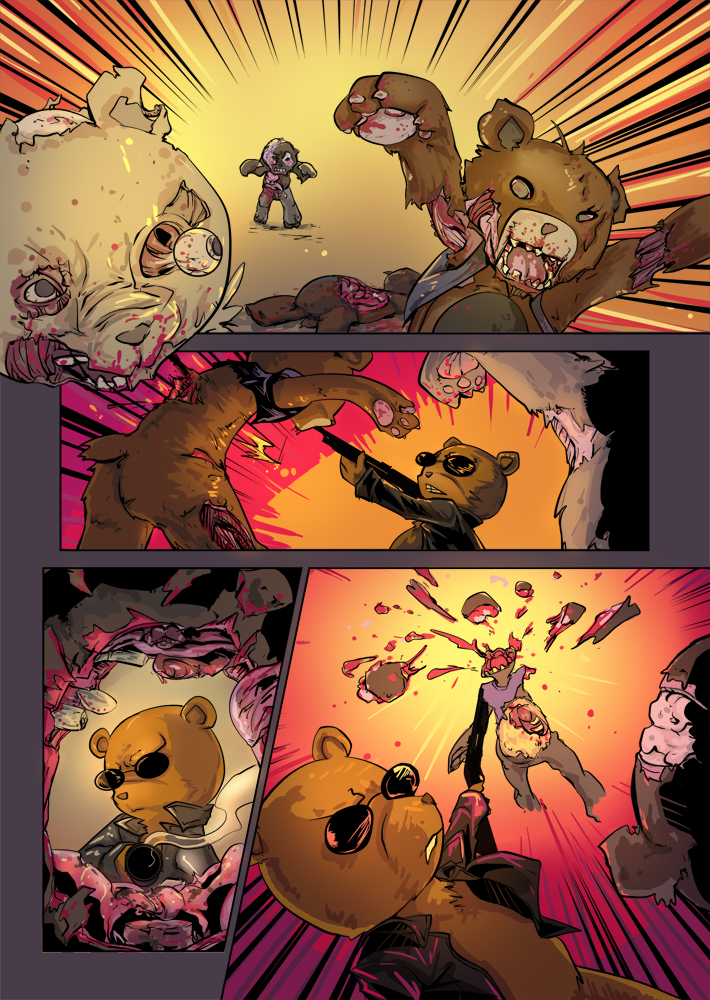 "Easily the best Indie comic of 2012. The Walking Dead meets the Care Bears."

If you grew up with Cartoons like the Care Bears or Gummi Bears and you wondered how they would cope in a post apocalyptic world full of deserts and towns full of zombies Bearlands maybe a comic to answer all your questions.

Bearlands is a new indie comics published by Subversive comics and is easily the best indie comic I’ve read in years and one of the most original works I’ve seen in a long time. It’s got a great addictive story complemented by some amazing artwork.

One thing I don’t like about a lot of comics is how slow they can move in terms of story, few writers have managed to master the art of using sequential art to support the writing temperament creating a fully immersive experience for the reader.

Bearlands may look to be based on a world where the inhabitance of Endor have taken over the Earth after a Zombie outbreak and well that’s pretty much it. The first issue is a 24 page self published zom-bear masterpiece combing the best bits of dozens of classic zombie movies.

Being a cute spoof of numerous zombie movies but featuring bears its entertaining on so many levels, there is gore but combined with a cute army of zombie bears it has a certain charm which makes you want to poster the walls with the vibrant artwork. There is also the emotive attachment you have with the characters as they lose everything they once had and you imagine it was a pretty fuzzy happy world until the zombie outbreak happened.

Being an indie comic Subversive comics have made sure each page is packed with story, it the first 24 page issue titled Left for Ted covers as much ground as the first two volumes of the Walking Dead or all the Resident evil movies and I am Legend combined times by twelve.

But be warned its a very re readable comic, Jeremy Biggs who wrote the story has obviously spent a lot of time on this issue making revision and squeezing the most out of the 24 pages to make sure all who read are instantly hooked. Saying that this is one of those comics you could buy just for the cover with its mesmerizing detail of an un dread Ewok.

Despite the bright colouring and cute characters – Bearlands is a gore-packed and gruesome comic tracing the plight of our hero, The-bear-with-no-name as he fights his way through hordes of the undead to find the bear responsible for the zombear apocalypse and rescue his family.

The artwork is all done by Bakki who is an an amazing artist from Thailand who does a lot of work drawing cute anthropomorphic animals in action poses and have a great eye for movement on a page. I’d love to see what she could do with an issue of Elephantmen and really looking forward to seeing more of her work.

Overall Bearlands is a comic which takes its self seriously in delivering a quality comic but is amazingly fun and entertaining to read. If you are a stranger to indie publications this is an amazing start, on the other hand if you have read indie comics before and felt you didn’t get much out of it this series should reinstate faith in the indie publisher.

Bearlands will be available to comic shops soon, a few may already carry it and Subversive Comics will also be at a few comic conventions this year including MCM London (end of October 2012) and MCM in Birmingham this November. 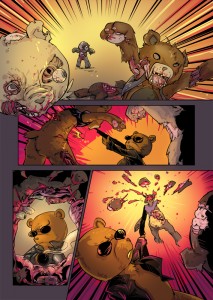 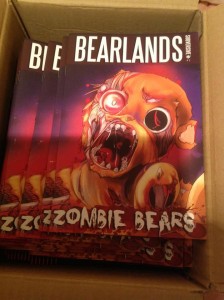 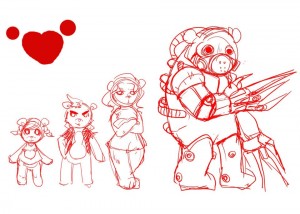