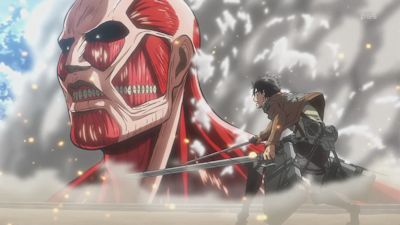 Replacing Gantz as a regular manga read hasn’t been easu once I found Attack on Titan it made the search all worth it.

Attack on Titan also known as Shingeki no Kyojin (Advancing Giants) is one of the best mangas I’ve read with it’s ever expanding fast paced story. It’s also genius in terms of tapping into popular works and combining them.

It’s about small civilization who live within a walled city. The wall has been up over a hundred years to protect them from giant human eating monsters.

Zombie seem to be the in thing at the moment and this manga takes it to the next level, if you imagine Walking Dead but with giant 50 meter tall zombies which are hunted by anergetic teens and you have a good idea what Attack on Titan is about.

I’ve read a lot of manga and few manage to keep a story going at a fast pace being published weekly. Writers commit years of their lives to continuously writing manga and not many can keep them consistantly at a high level like this.

It’s written and illustrated by a very talented artist named Hajime Isayama who is in his mid twentys and this is his first published manga. It’s been a regular ongoing manga since 2009 and inspired a TV series which follows the manga and a live action movie which has been in production since 2012.

The basic story revolved around several towns protected by a wall each. The walls keep out giant zombie like monsters from three to fifty meters high and some with some very special powers.

One day an inteligent titan knocks a hole in the outer wall and the story develops from there.

If you like horror or manga or giants it’s a must read. I really applaud Hajime Isayama for being able to both write and illustrate this manga especially at the age he is. It’s a raw and original talant he has and the manga is unmissable. I can’t wait to see how it develops in the future and hope he manages to keep the quality up.