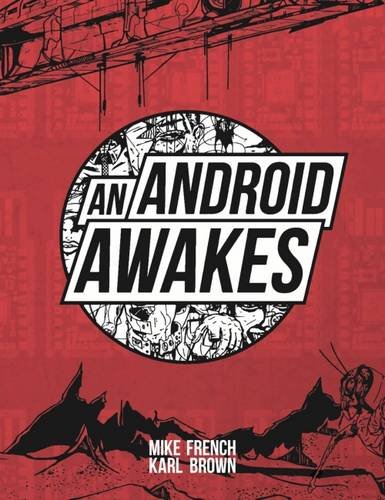 "A must read sci-fi neo-noir. Sex, violence and a desperate android"

An Android Awakes is an original science fiction story written by Mike French and illustrated by Karl Brown published by Elsewhen press.

Android writer PD121928 is part of the Android Publishing Program. To replicate a writer’s life, his wife has been forcibly removed and he lives in solitude with an allowance for  state prostitutes and drugs. Having just has his novel The Eating of Citizen Kane rejected, he now has 14 more attempts to get accepted for the program or he will be deactivated.

We’ve seen a lot of great indie comics being published over the last few years and this is another one of those which shows the bigger publishers how it’s done.

An Android Awakes is a 200 page graphic novella. It’s not in a sequential comic style much like the first volume of Metal Made Flesh which again was a great sci-fi story. There is so much story to tell it would translate into a graphic novel with 100 volumes so I can see why they chose to tell the vast story as they did.

It’s a classic sci-fi which will mature with age, the whole idea of it is like nothing I’ve seen before and the way it delivers an almost anthology style book all tied together in a dark and original story. Even though the book is about an android writing to stay alive you really feel for him. Like a good science fiction it’s a real life situation people live through every day just in a futuristic setting. I’ve shown this book to  few friends who are writers and they have all loved the idea.

Anyone who works in a creative industry can feel the pain of Android PD121928 as he pores his heart and mechanical soul into each short story he submits just to sit and waits for those rejection letters. Even though he is a robot with a freezer full of frozen cats you really can related to him and want each submission to the publishing company to be accepted.

The book is far more than just a story about PD121928 as most of the book contains the best of his submissions. The short stories are very unique and would make really good story on their own. They are pretty dark with some covering some very interesting science fiction concepts in each.

The artwork which accompanies the story complements it really well, it is based in that neo-noir style which manages to tell a story on it’s own. It’s probably more well known for works like Frank Millers but I find Karl Brown’s work reminds me a bit of Allan Linder’s Prisoner of the Mind which I really loved. The detail in the illustrations is immense and keeps you scanning over it to see if you missed any details the first time.

I would highly recommend this book to anyone even slightly interested in sci-fi. It’s a great story which would make an amazing movie. It’s complete in every way. You don’t know how exactly the world ended up using android writers but you know this androids story. His thought process, is desperation and the sacrifices he has to make to get this one story published.

I’m looking forward to reading more from Mike French and seeing more of Karl Brown’s illustrations. They are both masters of their arts and bring this story to life.

Buy An Android Awakes on Amazon – Kindle and Paperback 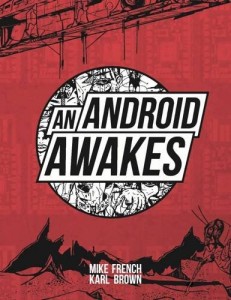 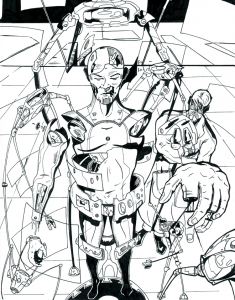