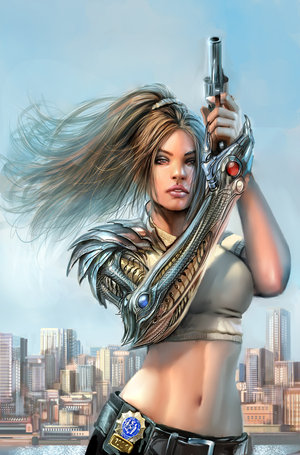 Witchblade probably best known for Michael Turners original art work but has evolved over the years into a comic series which has been one of the most popular comics over the last decade since it first arrived on comic shelves back in 1995. It has also inspired a popular anime cartoon and TV series along with an in production movie.

Rumours of the movie have been flying around for a few years now but we can only get closer to a release date. In 2008 an official website was launched for the movie which indicated it might have been released in 2009 but for some reason was delayed.

The official news we have from Top Cow Productions is positive and although it may be delayed the movie is still in the works with Arclight and Platinum attached as production and Michael Rymer is signed to direct what could be one of the most awesome comic book movies yet.

One of the recent rumours was that Megan Fox had signed to play Sara Pezzini but nothing official has been released with regards to the cast yet. Although Megan fox has signed up to the Fathom movie which is another comic line featuring work from the great Michael Turner.

Personally I cant wait to see this one, I’d love a Witchblade movie shot like the original Highlander with a history of the Witchblade its self but any way they do it I’m just glad they didn’t rush into it.