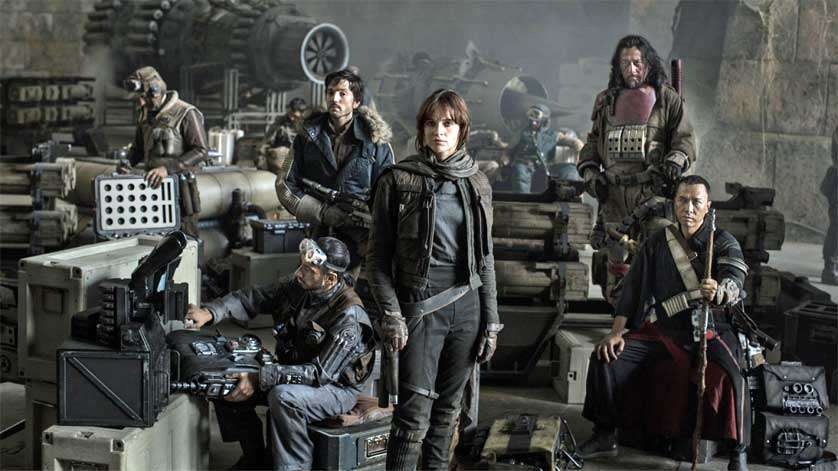 "The most innovative movie I've seen in years"

This is one Star Wars movie which just breaks the mould which constructed the rest of the movies. It bridges part of the large gap between episodes 3 and 4 which were probably the missing golden days of the Empire.

When George Lucas started writing Star Wars it was with one thing in mind.

“I realized that there are really no modern fairy tales… I wanted to make a … film that would strengthen contemporary mythology and introduce a kind of basic morality.”–George Lucas (Star Wars Original Movie Script)

Which sounds strange when you think of Star Wars but with the placement of a Princess, wonderful powers and monsters it starts to make sense. But this is what makes Rogue One stand out as it doesn’t seem to have that fairy tale in space angle. The fact it wasn’t made with two sequels in mind makes it a little more self contained too.

Rogue One features a  cast of mostly new characters which gives new and old fans something to unravel and speculate on, they are a band of very different people from very different backgrounds all with one goal that has brought them together. It’s a great team dynamic which I think is partly thanks to the fact they haven’t planned a trilogy around it.

I think a few movies may have digitally attempted digital recreations of characters but I’ve not seen anything like the Resurrection of Grand Moff Tarkin. He first appeared in episode 4 back in 1977 and thanks to the genius CGI work he hasn’t aged a day. When he first shows up in the movie I’d initially thought they just found some previously unseen footage much like how they restored unused Harrison Ford footage for the Jabba the Hutt scene in the remastered episode 4. But no it’s all new footage, they use the same technique for a few classic characters but Grand Moff Tarkin was just amazing to see again. He probably had more screen time in Rogue One than he did in the original movie. By bringing a digital character restoration like this to the movies they have really changed cinema forever. Imagine doing the same with Robert Downey Jr and having Iron Man pop into Marvel movies for the next 4o years.

The leading character in the movie is Jyn Erso who is played by Felicity Jones. She is the daughter of Galen Erso played by Mads Mikkelsen (Hannibal, Doctor Strange) who is the weapons designer responsible for the Death Star. Jyn is one character I think will be a real legend in the whole Star Wars mythology and although Rogue One is an amazing story I have a feeling Lucas Arts / Disney will wish they could bring her back to the movies somehow.

With the original movies they left so many gaps and questions so it makes sense to fill in the details with these more stand alone movies. I think Star Wars started the big craze in prequels years ago and now they have started something new with making these “filler” movies. It’s a great concept as you already know how the movie will start and end but all those twists and turns in between really make it interesting.

Rogue One has opened the doors to so many new possibilities for Star Wars and other movie franchises too. They fact they have successfully made a gap movie and made an excellent one at that makes it easy for them to introduces others for the early days of Han Solo and other characters.

One thing I really love about the new Star Wars movies is the female leads, so many big studios have said for years that could can’t have an action movie with a female lead which is one reason we haven’t had a Black Widow movie and it’s take so long for a Wonder Woman solo movie too. But then Disney have just gone right into it and developed these two really strong female leads for their movies with Rey and Jyn.

Overall Rogue One is an amazing movie, it’s strayed from the usual template of a Star Wars movie and just innovated the formula and opened the door to a lot more expanded universe.