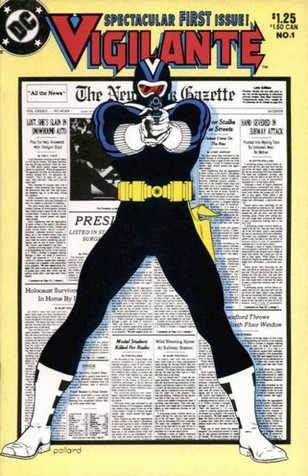 With comics taking over Hollywood there is a lot of pressure on publishers like DC and Marvel to stay on top of things.

Films like the Dark Knight and Superman Returns, V for Vendetta, Constantine were amazing and all part of the DC universe. But with movies being made just for the sake of making a movie like Steel and Jonah Hex (the movie even Megan Fox in a corset couldn’t save).

Vigilante is DC’s original bad boy hero, he doesn’t have any real super powers but he does have a cool motor bike and deals with pretty extreme every day crimes.

His origin is similar to Punisher or Daredevil in some ways, was a New York DA whose family was killed by mobsters and now dons a costume to fight crime with a fist instead of a badge. Some of his stories were also written by the great Alan Moore so that should be reason enough to make a movie.

One of classics, from the 40’s created by Jack Kirby and Joe Simon the Guardian is DC comics answer to Captain America. He was a cop from Metropolis who wanted more justice and less criminals on the street. The Guardian has an awesome back story and has had a run in with most of the Justice League making him an awesome candidate for a movie.

Not much needs to be said about Green Arrow other then why hasn’t he has a movie yet. He grew up with wealthy parents and lost learnt to fight for survival one day when he got stranded on an island. A self made hero much like Bruce Wayne. Maybe he will get a movie once Smallville is over but we will need to keep our fingers crossed for that one too.

Again no super powers but one awesome back story, he steals from museums in the future to get super hero weapons and time travels though the DC comics tine line. A true glory seeker and could have been as big as Wolverine if he has more backing from DC.

At first I was thinking maybe a Big Barda and Mister Miracle movie but Female Furies could be an intergalactic story of war, love and just sheer awesomeness. A movie that could introduce Darkseid to the big screen along with a war planet and beautiful ladies.

The first Supergirl was pretty cool but it was missing the main ingredient which made Supergirl possible, where was Superman! If DC wanted to make a new Superman movie line up they could easily fit a Supergirl film in between. Laura Vandervoort was awesome in Smallvile so lets hope it will inspire DC to her back to the big screen.

The previous Swamp Thing movies were well made for the time but how cool would it be to see a modern CGI’d up to the max movie. He was once one of DC comics big hitters but has been forgotten about in the last few years. Born from a chemical accident and now more plant then man he broke the mould for super heroes.

The Vertigo Sandman may be getting a TV series but the DC versions have so many possibilities. From being a guy who sprays sleeping gas at criminals to fighting terrorists in Afghanistan. A movie franchise would could rival the Dark Knight as the character has so much depth.

The closest thing DC has to the X-Men, They are super heroes which are regarded as freaks by society. One of the reasons a movie would be so cool is the diversity in characters. They even have a Cyborg, What’s not to love. When the original series was cancelled in the 60’s the team was actually killed saving a small fishing village.

Once individual super villains now a team of mercenaries working on missions from the government which nobody else would touch. In some ways they could be DC comics answer to the Avengers and make an interesting movie.