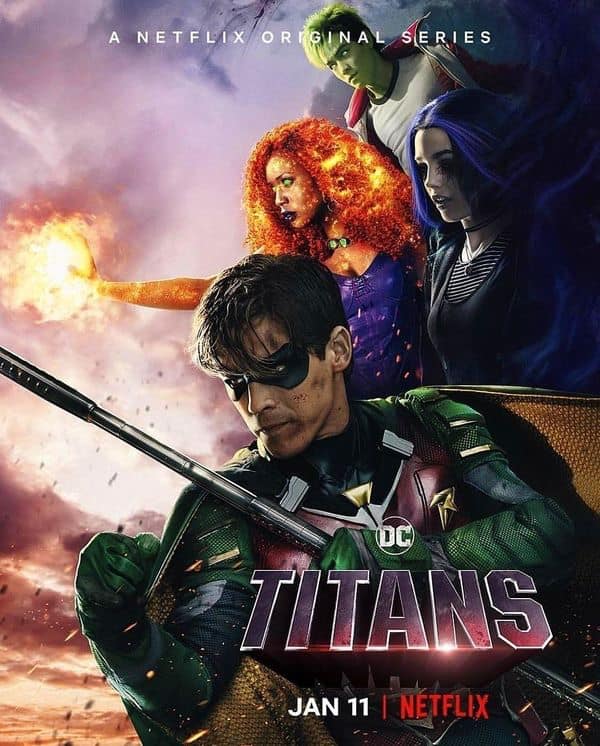 "Who needs the Justice League when you have the Titans"

DC has an amazing track record of making amazing TV shows which I think Warner Bros would love to carry on to the movies. The latest TV show from DC is a bit of a dark horse as it’s based on the characters from Teen Titans but is very much an adult TV show. It debuted on the new DC streaming service but since it has limited reach it will be coming to Netflix for many countries including the UK on January 11th 2019.

Whenever a new comic TV show comes out regardless if I think I will like it or not I will usually give the pilot a watch and see if it hooks me, for this show I was hooked in the first five minutes. The only bad thing I can say is that it’s only 11 episodes and I really wished they did 22 or so.

Titans starts off as an introduction to the team, Dick Grayson (Brenton Thwaites) has left Batman and Gotham behind to start a new life in Detroit, he left his old life as he was getting too much like Batman and didn’t like what he was changing into. It’s a great start for Robin as I know from the comics what his origin was and I know he ends up as Nightwing but I don’t know what happens in-between, this show tells the story of that transition from being Batmans sidekick to a hero in his own right.

We also get introduced to Rachel aka Raven (Teagan Croft) who will throughout the season be the one who brings the Titans together due to being the unknowing bringer of the apocalypse. I think she’s the youngest of the Titans but is maybe the most powerful in the season and has a lot of mystery surrounding her power abilities. DC did a great job of creating her backstory as it really bounces of Robin. He meets her as a runaway child after her mother is killed and it gives Robin that whole role reversal dynamic from when he was taken care of by Batman when his parents were killed.

Another mysterious character in the series is Koriand’r aka Starfire (Anna Diop). Now the show did get a lot of fans protesting when some of the early on set pictures of Anna surfaced online and people didn’t like her look but I think it works really well in the show and I think those who didn’t like the on set pictures will change their mind once they watch the series. In the series she’s one of the most powerful members in the team but also one of the most vulnerable as she has memory loss and can’t remember who she is or what she was doing, she is drawn to Rachel due to some pictures she found which leads her to cross paths with Rachel and Robin later down the path.

One of the side stories in the series is the whole origin of Hawk and Dove which is amazing, it’s almost like they were going to have their own show but it was merged in with Titans. Hank Hall aka Hawk (Alan Ritchson) who played Aquaman in Smallville and Dawn Granger aka Dove (Minka Kelly). I really love their bits in the show and would love to watch a series based just on their careers in vigilantism. They don’t have any super powers and really help ground the show and make it a bit more palatable for an older audience as they rest of the cast come across as a lot younger.

One of my favourite episodes in the series is titled Doom Patrol where the two teams cross paths and Beast Boy joins the Titans. The Doom Patrol are one of many examples of why the WB/DC streaming service could be amazing, these shows are owned and created by DC instead of leasing characters off to other TV networks which are limited in the amount of characters they can use. Titans pulls no punches and crams as many references and characters into it as possible. Bringing the Doom Patrol team to life and only using them in the one episode seems like a waste but knowing they will get their own spin-off from Titans in 2019 makes me happy. Robotman alone could lead a show and I’d watch it.

The series ends on its eleventh episode which I think might have been cut down or edited with it being renewed for a second season as the show was originally planned for twelve episodes. Either way it was an amazing finale with Robin facing off against Batman. I’m not sure if they want to introduce Batman properly in season 2 but the first season has shown how we don’t need him with good writing and Robin.

Overall the show is just what DC needs right now, a well written show aimed at an older audience and one set in a DC universe which can include any character they want. I can’t wait for season 2 especially with the tease of Super boy joining the series.

A review of the first three episodes of Titans Season 3, we’ve seen so much already I love this show.