"An amazing start to a new DC comics TV show"

A few months ago we saw some on set pictures of the then what we thought was a Teen Titans TV show but now we have seen the full pilot and wow it’s not disappointed.

The show is by DC comics writers Greg Berlanti and Geoff Johns who have helped develop a lot of DC comics TV shows and movies so you know it’s in good hands from day one.

Titans as the show has been called isn’t what I originally expected from a DC show. Going off the pilot episode it’s pretty violent and doesn’t seem to pull any punches unlike the comics that we’ve had recently.

The main character is Dick Greyson who I thought would be in his Nightwing stage of his life but he’s only just moved from Gotham to Detroit and wearing his Robin costume. He’s played by Brenton Thwaites who has done an amazing job of bringing the character to life for this TV show. I feel like Gotham should have started with someone like him to play young Bruce Wayne instead of the very young cast they started with.

Robin in Titans almost reminds me of the Punisher, he’s got his mission to clear up violent crime with more violence and the pilot has really set a high bar for the rest of the series to follow in terms of action and fight scenes.

We also get introduced to Starfire who is played by Anna Diop another great casting choice. I know from the on set pictures a lot of fans didn’t like the whole look of Starfire but I think she looks and acts great, the show is backed by DC comics writers and they will know the characters better then most of the fans and I trust their proven work. Stafire is a very mysterious character in this show much like Raven and I’m looking forward to seeing them explain the mysteries as the show unfolds.

Raven seems to be the one who is bringing the Titans all together for some reason she’s played by Teagan Croft who is the youngest of the Titans so far. I’m guessing by the way the pilot has started that she will either lead them to the main villain somehow, they really don’t give much away in the first episode but that’s expected a lot can change from the pilot to the second episode.

Overall I’m really impressed with the show so far, I’m hooked and want to watch more. But creating a good TV show is only part of it’s success. We’ve seen plenty of shows like Constantine fail due to things like ad timing on air dates and overall distribution. You can make the best TV show in the world but if only a few people can see it in a potentially huge audience it’s not going to make it through the first season. That’s why I think online streaming is so good for shows like this. You can potentially get it in front of the whole world without having to worry about a good network picking it up and putting it on at a good time.

Titans seems to be the first in a whole line of new DC comics shows coming to DC Universe, their new streaming service which will even include a Harley Quinn TV show. But at the moment this service is only open o the USA. Overall a bad move on their part. I’m not sure why some online services are only available to certain regions but if you want fans to promote the show online make it available world wide the same week at least. So far, great show, bad distribution.

A review of the first three episodes of Titans Season 3, we’ve seen so much already I love this show. 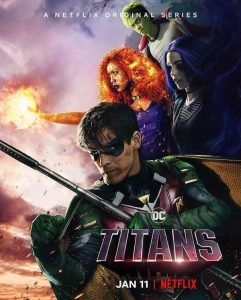