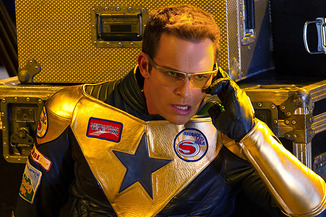 Everyones favorite washed up sports hero from the future may be getting his own TV Show coming in 2012. NBCs Syfy has commissioned a script of Booster Gold for his own 1 hr TV pilot.

The script is currently being penned by Andrew Kreisberg who has written some pretty successful TV shows recently such as Warehouse 13, No Ordinary Family and has written for the Justice League animated series.

The series also has Greg Berlanti set to produce. Greg also has a history with DC comics as he produced the Green Lantern movie. He also worked with Andrew on No Ordinary Family.

That being said the Booster Gold TV series really couldn’t be in better hands.

Although the script might not see the light of day there is a good chance a series could go into production in 2012. Hopefully it wont see the same fate as David E Kellys Wonder Woman but with Kreisberg and Berlanti hehind the show already it looks to get at least one series.

Even with a great pilot the character will need a bit of a revamp to fit in with the new DC Re boot and with Smallville out of the way it can have a clean slate unlike the Aquaman pilot which was awesome but didn’t get far due to conflicting Smallville cast.

For those unfamiliar with Booster Gold he was a sports star from the future who threw a few games and traveled to the past with stolen super hero artifacts to make a new name for himself. A series could give writers a massive range of flexibility to work with. Booster can cross over with any other DC character with time traveling and flying powers at his disposal.

Thanks to the Hollywood reporter for the news.