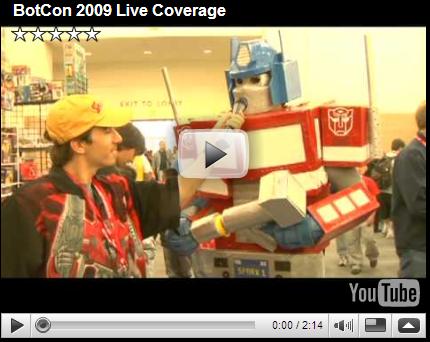 Dahveed Kolodny-Nagy had has had a great journey while making this film which almost deserves a documentary of its own. The Transformers Awards project gained the attention of both Toy Fair magazine and IDW which is no easy feat and he has now moved on to complete the Transform Me documentary which delves into the world of Transformers and the impact it has has on generations of fans over the last 25 years.

The Transformers Awards finished in 2004 and you can catch the results on the official Transformers Awards website, to me this is a great insight in how fans of the original material felt  where as the recent movies may influence new fans into thinking Megatron wasn’t a size shifting killer robot who transformed into a gun.

Dahveed’s work continues with Transform Me, the documentary in which interviews some of the hard core fans who would maybe get shunned from common society for dressing up in cardboard boxes but are worshiped in the Transformers fandom.

You can follow the progress of this project on Dahveed’s Transform Me blog which has videos of his progress and snippets of the film as he interviews fans and stars from Transformers. One of the videos Features Gregg Burger who will also be attending Auto Assembly 2009.

Also remember to stop by Toy Hell and support the project by buying some awesome knock off Transformers.