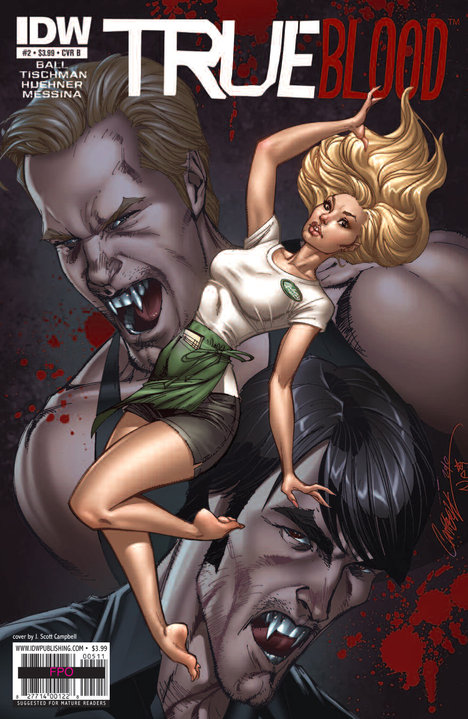 IDW have grabbed another big comic licence in the form of HBO’s True Blood. It’s not going t be based on Charlaine Harris‘s original material for the True Blood but instead based on the characters from the HBO series.

The first issue follows Sookie and the others being trapped in Merlottes by a spirit who feeds on shame and encourages them to share past and painful memories with similar story archs to the series.

The comic is going to be released the same month season two airs but there is no sign that this will be a tie-in to the TV series but the first run will be six issues. From the talent behind the comic I’d hope it is a long running series.

The comic series is co-created by Alan Ball who created the HBO TV series and co-written by David Tischman and Mariah Huehner and exclusive to IDW.

With artwork by David Messina and J. Scott Campbell it could be an awesome run. Campbell really knows how to draw hot comic characters which should help as the series is supposed to follow on from the sexy vampire series.

The first issue will feature a pull out poster from David Messina and feature four variant covers in equal 1 to 1 distribution.