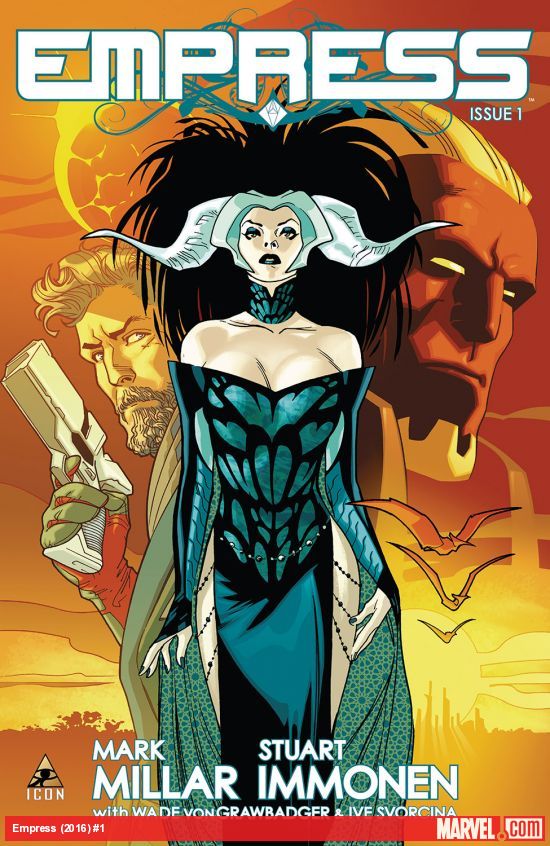 "Dinosaurs, dictators, aliens and a hot Empress. What's not to love"

I’ve been a fan of Mark Millars since his work on the Ultimates which at time and still now is probably one of my favourite Marvel series for it’s reinvention of some well known A listers, the modern twists and the realism it brought to today’s superhero comics.

Since then he’s focused mostly on creator owned mini series which mean he gets to tell a proper story without having to take direction from the big publishers planning tie in stories. Some of his recent creator owned comics have become massive hits, ones like Kick-Ass got a movie in production before the comic was fully published. Superior and Huck have also gone on to continue that modernisation of comic superheroes by giving readers something new.

Millars latest new series Empress has just hit the shelves and after one issue I’m hooked on one of his series again. Similar to Star Wars it’s set in a high tech universe from a long time ago…

I love the pace of this story, it sets up all the characters by giving you enough of their past and present to fill in the gaps in between. I think it’s a combination of the well thought out story and some amazing sequential art by Stuart Immonen which capture all those face expressions which carry you through the story.

In the first issues we’re introduced to this new land and its king Morax a cruel bastard who rules his kingdom through fear of execution by  T-Rex. He lives a privileged life side by side with his beautiful Empress named Emporia. After years at his side she has become weary of his ways and wants a better life for her and her three children.

It’s a familiar story where a mother runs from a bad life so her kids can have better one. The Empress is a street smart resourceful woman but Morax has a whole kingdom at his command. It’s going to be a great chase series with the odds against the Empress as the galaxies worst dictator chases her from planet to planet with a fleet of ships.

Overall I love the latest comics Millar is producing. The back story seems simple enough to jump on board with at start, there are lovable characters you bond with after a few panels and then there are those big twists in the story around issues 3-5. He’s got a great formula for writing comics at the moment and it’s influencing a lot of young writers.