HometvAsh vs the Evil Dead 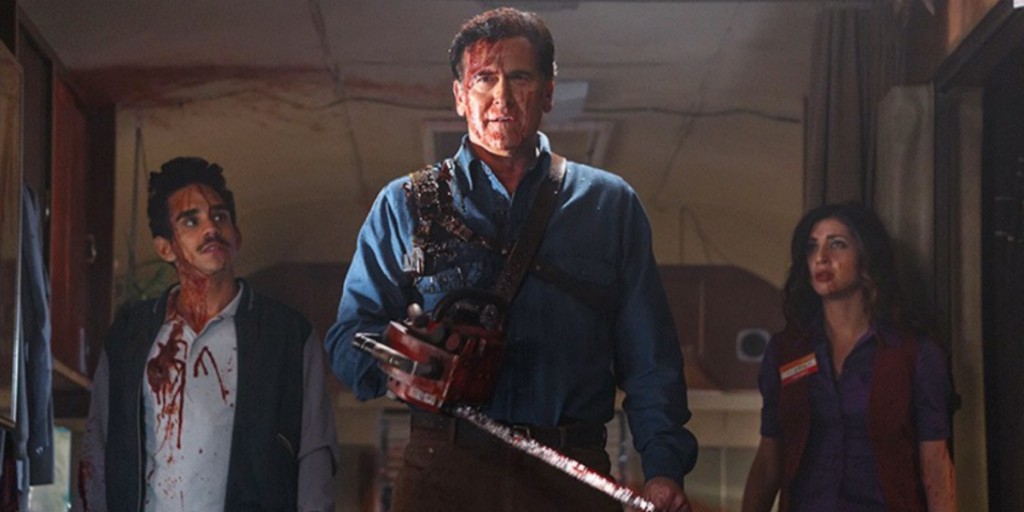 When the original movie was made I doubt Sam Raimi and Bruce Campbell could have ever thought it would have the cult following it did. Now were nearly 35 years on and the low budget movie has turned into a high budget TV series with a pilot which probably cost more to make that all three of the old movies.

Going from a movie franchise to a TV series and adding over thirty years between them you would think the original charm might have gotten lost but it’s all still there if not amplified. Sam Raimi’s directing skills and story writing has improve, he’s had years to think about the Evil Dead and I bet he’s had thousands of ideas over the years that he wanted to try out and now he has a TV series he finally can. Bringing back Bruce Campbell was a great move too, honestly I can’t think of anyone who could replace him, the way he brings humour to the horror genre is so unique and those one liners are delivered so well still after all these years.

Over the years they have tried to bring back Ash to do more movies and there was even an Ash vs Freddy and Jason in the works but due to everyone wanting their character to end up on top it never worked out. With it being so long since we had a new Evil Dead movie it’s almost like we’re making up for lost time with a TV series. ten full episodes of Ash vs The Evil Dead action.

One thing I really like about this series is how it all just seem to fit together with the movies. Everything from the camera angles to the extreme close ups just fits together like it did the first time you watched the Evil Dead. It’s just pure entertainment like all movies and TV should be.

Being a fan of the original movies I appropriate that they had limited technology and budget back then and now they have so much at their disposal from better make-up to CGI and even just budget for better sets. It’s almost like this is the Evil Dead that Sam Raimi had in his head years ago but just didn’t have the tools to make it.

Where the movies had limited time there was only really one star but now they have more time to fill out and have introduced a few long standing cast members and it’s going to be interesting to see how they fit into the Evil Dead world and where it will end up. I’ve wanted a new Evil Dead movie for years but now TV shows can deliver the same quality of action and entertainment I’d much rather this series succeeds and keeps going. Who knows maybe we might even see Freddy or Jason turn up in the second season.

Going off the first episode which had some amazing action scenes I think Ash vs The Evil Dead could open up a whole new genre of TV based horror comedies. It’s almost like someone said Friends was good, The Walking Dead is good, lets throw them together and see what we have.

The first series is going to be ten episodes long and it looks to have been renewed for a second season already. It’s looks to be aimed at fans of the movies and I think they have been the power behind getting this series made but it’s all the new fans that this series pulls in that will keep it going.