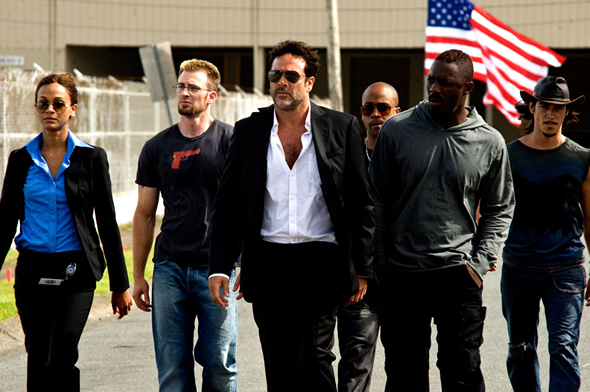 I loved Iron Man 2 but it wasn’t for everyone, The Losers on the other hand could sit a bit easier with most audiences. Here’s the Super Robot Mayhem Review of the Losers.

The movie isn’t an obvious comic book movie, other than the intro and credits its like any other action flick. Its about a team of CIA black ops who are on a mission and get betrayed kinda similar to the A-Team.

It’s the first film I have seen with Sylvain White as the director, he is also rumoured to be directing Frank Millers Ronin movie. Sylvain has done a great job with all the action scenes as he has managed to fit so much into the hour and a half or so of the movie.

The cast all fit together so well and really get into each part. It has the up coming Captain America Chris Evans and Jeffrey Dean Morgan who played the Comedian in Watchmen, and Zoe Saldana from Avatar and Uhura from the new Star Trek movies.

Overall its a great movie and I would recommend going to see it. But I think it would have helped if they cut some bits out as it wasn’t too clear what the whole motivation was for the team at some points. It starts out with them wanting to clear there names then its just revenge and then they end up only managing to stop an new type of weapon from blowing up LA.

So it was a great cast but the story had it’s ups and was maybe a bit rushed, it was a great advert for the comic which I will definitely pick up to compare and fingers crossed for a sequel.