"A great jumping on point for Marvel movies, so much action and such a great story."

Marvel have been building a multi genre movie franchise for over a decade, they have spy movies, world war centric, sci-fi, heist movies, supernatural and now they have their first big martial arts flick with the addition of Shang-Chi Legend of the 10 rings.

It’s an origin movie set well in the Marvel Cinematic Universe, the story spans hundreds of years as we explore the history of the real Mandorin but most of it is set in present day after the “blip” it doesn’t give us a specific time where it fits in the MCU timeline but it’s got Ben Kingsleys Trevor in prison so it’s a few years after Iron Man 3. I’m not sure when Trevor will get his own movie but he does deserve one at this point.

The movie begins with Shaun aka Shang-Chi who works as a car valet in San Francisco, he’s pretty happy in his life but one day he’s ambushed by assassins in an amazing  moving bus fight, imagine all the fights in all the Bruce Lee movies taking place on the bus from Speed and you get close to the action we see in this scene.

He then figures that the assassins aren’t just after him but his sister whom he hasn’t seen since they were kids. Then the story jumps over to one of my favourite places in the world Hong Kong. If you’ve ever been there you will know about the amazing construction work they do on buildings where they don’t use steel scaffolding but bamboo, it’s amazing sight to see a skyscraper housing in a bamboo frame and the writers behind making this movie have made good use out of it with another massive fight scene.

Personally I’ve lost count of how many fight scenes there are in this movie, if you like martial arts you will be spoilt with this film. Although many of them are the kind you might see in those mythical movies like Couching Tiger hidden dragon. In fact there is even a fight which involved a giant dragon.

With all that said it’s like nothing we’ve seen in the MCU before, I’m really amazed at how Marvel Studios have been able to make such a diverse movie franchise and make it all work too. Fans ask for something and Marvel are listening.

We’re in a void at the moment between big changes in the MCU. I’d love to know how Shang-Chi as a character will fit into the other movies, will he join the Avengers, I’m guessing they are making a team of New-Avengers with the likes of Spider-man, Blade, Shang-Chi etc. Maybe they will keep a few of the heroes in their own movie franchises with just a few elements crossing over.

One thing I’d like to talk about is Benedict Wong who plays Wong the master of the mystic arts, he brought a lot of humour to the movie and I’ve love to see him show up in other Marvel movies like replacing the Stan Lee cameos. In Shang-Chi we even see him fighting Abomination from the Incredible Hulk which was a very unexpected cameo. How did he get there, where did he go, I just love all these questions you get when watching a Marvel movie.

Overall it’s amazing movie if you’re a fan of the Marvel movies or not, in fact it’s probably a good jumping on point for new fans. 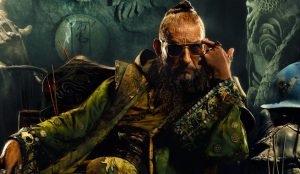