Batman vs Superman casts its Cyborg 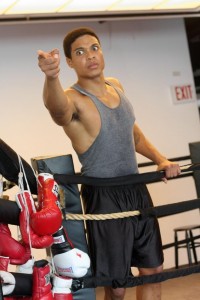 The latest news on the Batman Vs Superman set is that WB have cast stage actor Ray Fisher to play Cyborg in the movie and later have a bigger part in the Justice League movie.

The movie started off as a Man of Steel sequel and soon had Ben Affleck attached to play Batman. Together with Wonder Woman, Cyborg and the rummoured Green Lantern and possible Aquaman we could see the beggining of a whole cinematic Justice League.

Overall the casting for the Justice League has been very surprising but we will have to wait for the trailer to see just how well the cast is placed.

It’s funny how the movies working title is Batman Vs Superman. Ray Fisher played Muhammad Ali in his stage career and Superman did fight him in one of the old comics. how funny would it be if the movie was secretly a Superman vs Muhammad Ali film. The chances of that would be very low but it would be well worth seeing.

One of the biggest questions now will be how WB will deal with Cyborgs origin. Will he already be the Cyborg or will something happen in Batman Vs Superman to kick start a whole chain of events which will form the Justice League.