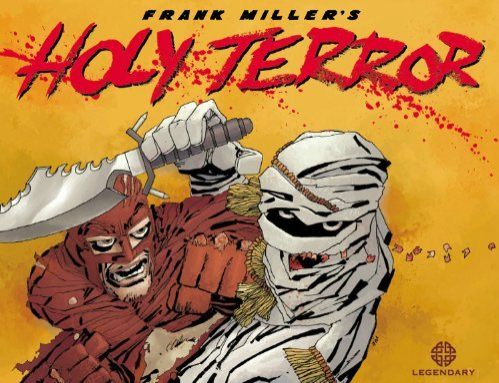 Even with a pile of comics from the last week of the DC reboot in hand I couldn’t help but to read Frank Millers latest offering Holy Terror.

The story it’s self has gone through a few drafts over the 10 year in the making. Frank Millers original idea was that if Daredevil and Captain America could punch Hitler why couldn’t Batman hit Bin Laden.

What started as a controversial Batman Graphic Novel which got the red light from DC Comics turned into something new entirely. Franks replaced Batman with his creator owned character the Fixer and changed a few names but for the first half of the book you might believe it was part of the Batman Millerverse.

What happens in the second half of the book is very much not Batman and I don’t mean All-Star Batman And Robin different. We see his lead character shoot terrorists, order hits on bad cops and torture a guy before blowing him up using his own bomb.

The story begins with the Fixer chasing down a cat burglar called Natalie Stack which is to the Fixer what Catwoman was to Batman. He catches her after a heist and they end up smooching on a roof much like this months Catwoman #1. Out of nowhere a nail bomb goes off followed by one with razor blades. Setting the brutal tone for the rest of the book.

The book has a few choice Frank Miller lines which might make you both laugh and think how did he get away with that one. It’s classic Frank Miller but with a slightly new brutal story telling. Frank Millers previous work has always been set in fiction cities with fiction characters. With Holy Terror based around a city which looks like New York and the villains in the story are recognizable it gives the book a new depth which you wont see in comics often.

Art wise Frank has really gone all out on his classic Sin City style black and white with a dab of red or green which is his awesome signature style.

The book is presented in the landscape hardback book style we saw 300 in. I’m not a huge fan of the print format myself, each page turn I fear of tearing a page and it’s not easy to read on the train.

Overall it’s a total must buy if your a Frank Miller fan or if you just want to read something different after a month of DC comics reboot. I’m thankful of DC for ditching this book when they turned it down as a Batman story, it’s not really worth reading. 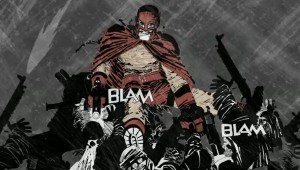